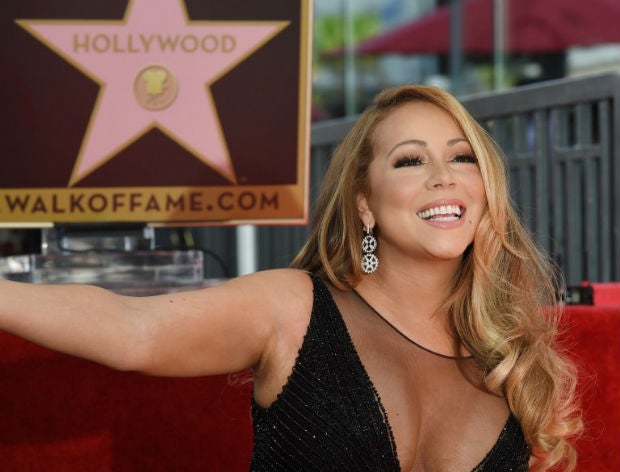 Singer Mariah Carey is honored with the 2,556th star on The Hollywood Walk of Fame in Hollywood, California on August 5, 2015. Mariah Carey is the best-selling female artist of all time with more than 200-million albums sold so far and 18 Billboard Hot 100 No. 1 singles. AFP

LOS ANGELES, United States – Mariah Carey joined the honored names on the Hollywood Walk of Fame on Wednesday, a tribute to the versatile singer’s 25 years of stardom.

Dressed in true diva fashion in a long, tight dress with black sequined necklines on both front and back, Carey sported sunglasses as she watched the unveiling of her name as number 2,556 on the celebrated walkway.

Carey, famous for her five-octave range, thanked fans who have supported her through a career that has produced such smash pop hits as “Hero,” “We Belong Together” and “Someday.”

“I can’t thank you enough. You’re melting my heart. That’s why I keep my sunglasses,” she said.

Carey, who is around 45 but whose date of birth is a matter of dispute, has been one of the most successful artists of the past two-and-a-half decades, with more than 200 million albums sold worldwide and five Grammy awards.

Both children clung to their mother and Moroccan appeared especially attached, crying when nannies pulled him away from his mother’s photo shoot.