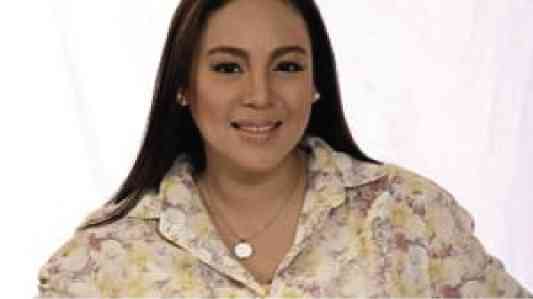 BARRETTO. Winning the Battle of the Bulge.

MOST “HOPEFULLY comebacking” stars find it impossible to lose enough weight to again look good onscreen, which is why their return to the biz remains more hopeful than actual—sometimes, on a permanent basis. Well, they should find additional inspiration and motivation in Claudine Barretto’s own successful Battle of the Bulge.

Claudine has lost enough weight to “dare” to act for the cameras again in a new film with the likes of Kris Aquino and Kim Chiu—and other plump or downright corpulent stars can do it, too, if they are as determined and disciplined as she obviously has been this year.

We wish Claudine well in her now promising and “achievable” comeback bid to the big (and small?) screen, and hope that her transformation also includes a determined effort to sweeten up her public image, which has been too sour and combative of late!

For her part, Janella Salvador has just concluded her noontime teen teleserye, “Oh My G,” which added to her popularity and “K” to be regarded as a young pacesetter in this season’s show biz race for stardom.

But, it’s important for her handlers to quickly figure out what she should do as follow-up projects, because viewers tend to be forgetful these days, and last year’s fave could turn out to be this season’s “Who That?”

It’s a good thing that Janella is coming out with a recording, because it’s important to point out that, while many young female starlets can “sort of sing,” she really has the pipes for it, thanks to her mom, Jenine Desiderio, and her dad, Juan Miguel Salvador, certified singers both.

But, is that all there is to it? Janella should also consider doing musical theater, because it’s helped add cachet and clout to some stars’ careers of late.

Specifically, Janella’s backers should commission the creation of a new teen musical-drama-comedy in Filipino for her—and with her combination of performing skills, it should turn out to be a success that would add a lot of luster and stellar shine to her already promising persona and career.

On the foreign film scene: It’s interesting to see that former child star Joel Haley Osment has done quite well after his juvenile acting career ended. In fact, the now young-adult star is currently topbilling the romantic-comedy, “Sex Ed.” In the film, Joel plays a new teacher assigned to teach a sex education class—even if he’s still a virgin!

Osment became an acclaimed child star after he was cited and nominated for his early performances in “Forrest Gump,” “Sixth Sense,” “A.I. Artificial Intelligence” and “Pay It Forward.” Since then, he’s appeared in “Secondhand Lions” and “Entourage.” —Who says acting careers have to end with the onset of adolescence?

The “wild card” round on “It’s Showtime’s” “The Funny One” competition for comedians this week has turned out to be a low point for the ongoing tilt, with even the least talented finalists being given a chance to recover! Alas, some of them were incapable of improving, so the show’s viewers winced and suffered, instead of being entertained.

Things took an even more negative turn when the surviving finalists were asked to ad-lib jokes on a number of topics, like which would be better: to have two remaining teeth apart, or close to one another? Alas, even the finalists who had done well in the scripted and rehearsed rounds previously stumbled badly—they couldn’t ad-lib funnily to save their lives!

The tilt is now down to its top five surviving finalists, so we hope that we will no longer have to put up with its least gifted bets, who have long overstayed their welcome. One of them was so desperately tenacious that he went on with his grossly unfunny act—even if the studio audience was loudly demanding his early exit!

Who were the “talent” scouts who made him one of the tilt’s finalists, anyway? If only internally, the show should hold them to account—and make sure that, the next time it conducts a tilt for new comics, the bets they handpick are really funny!

On Dingdong Dantes’ ongoing series, a lot has happened since we last viewed it, with the dire developments led by Carla Abellana’s character (the mother of the parish priest’s love child) now battling cancer.

Last Wednesday’s episode ended with her feeling so bad that she insisted on confessing to Dingdong. —Very dramatic, but is this “personalized” resort to the sacrament in fact allowed by Church rules and regulations?

All told, we like the series’ timely decision to dramatize real-life issues involving priests and errant members of their flock—but, we find this particular priest too human and flawed, and feel that his spiritual side has not been tackled deeply enough. —Is this because the production’s creative staffers aren’t up to it?

The episode we watched also had Jillian Ward’s character trying to help her cash-strapped mom by secretly working as a maid—and getting physically abused and manhandled by her cruel employer.

The scene was supposed to make viewers pity Jillian—but, it turned out to be unintentionally funny—because Jillian is no longer a wee child performer, and in fact looked big enough to handily defend herself from her evil attacker—who was played by a rather small-framed woman!

TV people should really care more about how the scenes they stage actually impact on viewers!