Why Pixar’s ‘sleeper’ hit is a should-see | Inquirer Entertainment

Why Pixar’s ‘sleeper’ hit is a should-see 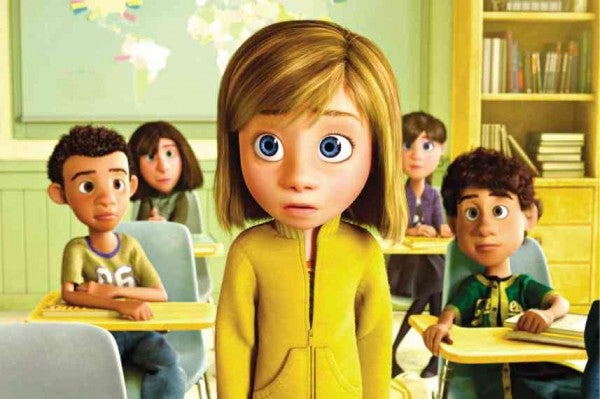 “INSIDE OUT.” Examines a teenage girl’s contradictory moods and emotions.

THIS EARLY, dear reader and fellow film buff, we’re cluing you in on a special production that’s set to open this month, because it’s by all accounts a should-see:

It’s Pixar’s “Inside Out,” the story of a “conflicted” teenage girl, Riley—who’s varying and sometimes even contradictory moods and emotions are visually “represented” onscreen by different characters!

As they interact in Riley’s mind, she gets affected—and so do her folks, who have to bear the brunt of her melodramatic outbursts.

So, the movie is a good, instructive and cautionary view—not just for young viewers, but for their harried and harassed parents, as well!

When we first heard about “Inside Out” and what it aimed to accomplish, we thought, “What a brilliant concept—but, can they execute it with equal excellence on the movie screen?”

Well, we haven’t seen the movie yet, but by all accounts, it’s done precisely that. So, view it, we should.

Even better, we’re pleased and proud to report that the film’s codirector (with Pete Docter) is a Filipino artist, Ronnie del Carmen, who’s also worked with Docter on such estimable animated hits as “Finding Nemo” and (one of our faves) “Up!”

It turns out that the movie resonates really well with viewers belonging to different age groups because its makers based it on their own experiences with their respective daughters, as they were (tempestuously, bafflingly) growing up!

That’s why the dad-directors’ execution rings true, and the full-length animated feature has emerged as one of the biggest “sleeper” (unexpected) hits of the year. So, let’s all watch it (with or without teenage daughters in tow) on Aug. 19, when it opens in the metro’s cineplexes.

Also definitely worth calling your attention to is the start of this year’s Cinemalaya indie film fest at the CCP and other venues, starting Aug. 7.

For more than a decade now, Cinemalaya has encouraged the best new writer-directors to make their own movies their way, so we should continue to support and patronize it.

This year, the competition is fielding only short films—but, it’s opening up its screens to a more regional cinematic orientation, with films from different Asian countries on view. Visit www.cinemalaya.org for the screening schedule.

Speaking of film fests, Maryo J. de los Reyes is championing—a festival that focuses on farming! Along with Universal Harvester, he recently helped launch the Tofarm Film Festival, which seeks to showcase six movies about the lives and concerns of farmers.

Maryo recalls the ’50s film, “Biyaya ng Lupa,” starring Tony Santos Sr. and Rosa Rosal, which was truly beautiful and powerful, and is sometimes even cited as one of the 10 best Filipino films ever made.

It would be great if the new film fest showcases other superior dramas or comedies about farmers, so that the “eating populace” (that’s all of us!) will be reminded of the unsung agrarian heroes who work hard to feed the nation! Deadline for submission of prospective entries is on Oct. 16.