Janella Salvador puts her prodigious performing genes to good use 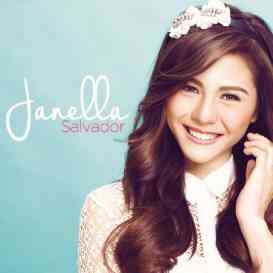 Let’s call a spade a spade: There’s a growing number of local recording artists who sound good only when their deficient voices are corrected, enhanced or magnified by auto-tune and other audio processing devices. Janella Salvador isn’t one of them.

When the 17-year-old comer isn’t singing about the heady pleasures of young love (“Ganyan Talaga”) and why teenagers need not rush into things, her voice, its wide range and unforced curlicues are showcased in age-appropriate songs like the radio-ready Himig Handog entry, “Mahal Kita Pero.”

“Harana” is as trendy as it is vibrant, and playfully sends up the popping and thumping remixes of the ’80s. Janella’s voice evinces an indie-rock edge in “Teka Muna, Pag-ibig,” and commands stadium-sized vocal girth and authority in “I Can’s” thrilling—and soaring—trills.

However, with its amped up new groove, “Dear Heart,” the theme song of the Megastar’s 1981 screen debut, is a disappointing misstep—because of the awkward dissonance between its wistful, ballad-appropriate lyrics and an arrangement that brims with dance floor-busting brio!

Tyrese hangs up his mic

Tyrese ends his music career on a high note with the release of his sixth—and last—studio album, the ballad- and R&B-heavy “Black Rose,” which debuts at No. 1 on the Billboard 200 this week. He’s been successfully juggling careers as an actor (“Fast & Furious”), Grammy-nominated singer, fashion model, MTV VJ and New York Times bestselling author.

The 36-year-old multihyphenate can afford to hang up the microphone and “ride high on the hog” as he tries to win back the love of his daughter’s mother, who left him because of his infidelity—and, with his two-timing but repentant heart on his sleeve, he wants her back!

With talented collaborators like Brandy (“The Rest Of Our Lives”), Chrisette Michele (“Don’t Wanna Look Back”), Tank and Snoop Dog in tow, the actor-singer’s 14-song repertoire is a musical mea culpa that features songs that are sleek, smooth, sexy—and sincere.

In the album, the effusively apologetic performer recalls their good times together (“Picture Perfect,” “When We Make Love,” “Body Language”), getting caught cheating (“Dumb Sh*t”), pleading for forgiveness (“Waiting On You”), realizing what he has lost (“Leave,” “Prior to You”)—and his earnest intention to change (the exquisite “Shame”)! How candid and forthright can you get?