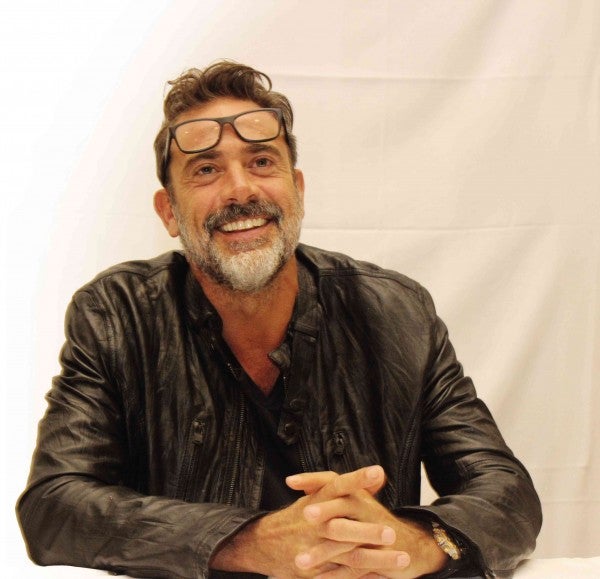 LOS ANGELES—Who do you wanna call if you want to “dirty up” a TV show? Apparently, it’s Jeffrey Dean Morgan, who’s been tapped to add sizzle to the shows, “Extant” and “The Good Wife.” “Usually when they bring me in, it’s to dirty it up,” Jeffrey said in his deep, gravelly voice. “Why that is, I’m not sure.”

Halle Berry knows for sure what Jeffrey brought to her sci-fi drama “Extant,” telling us in a separate chat: “He has brought fire and sex, edge and energy.”

Wearing a black leather jacket, V-neck tee and jeans, the actor plays an investigator in both shows. Wearing glasses that he later took off, Jeffrey has a great sense of humor, punctuating his answers with quips and laughter.

On recently joining Julianna Margulies’ legal and political drama series, he said, “We’ll see what happens … but my first thought when they came to me was that I’m certainly not a lawyer type. Can you imagine me as a lawyer? I couldn’t. They did tell me a little about my character’s backstory.”

Jeffrey shared about his character Alex: “What sold me on it was that this is a guy who doesn’t follow the rules. There have been some troubles. The guy is walking on the fine line between good and bad, which is how I’ve made a living for a long time.”

The bearded actor said, with a mischievous smile: “Plus, I’m scruffy and I don’t like to shave. I’ll fight the razor for any character.”

He spilled more details: “I know that I’m playing an investigator at her (Julianna’s character, Alicia Florrick) new law firm. Maybe there could be a potential love interest. I have nothing to base that on. They just told me.

“They just pitched to me as, ‘Look, we wrote this character and we had you in mind.’”

“Right now, it’s one season,” he related. “They offered it to me. I sat on that offer for a good two or three weeks before I agreed to do it. The work has been so constant and I had planned on taking the summer off. I’ll be damned—I start on ‘The Good Wife’ in a week.”

Jeffrey admitted not watching the two shows until the offers to costar in them came.

He said of “The Good Wife,” “Now, I have seen six or seven episodes from Season 1 and 3, just to get an idea. I know Julianna. She has a house up near me in Upstate New York so I’ve known her for years.”

Jeffrey almost turned down “Extant” because accepting the job meant being away again from actress Hilarie Burton and their 5-year-old son, Augustus.

But first, he clarified that he and Hilarie are not married. “I’m not technically married yet but we say we are and eventually we will be,” he explained. “I can’t stop working is the problem. So it’s hard to seal that deal.

“When I got the offer to do ‘Extant,’ I didn’t want to leave my family again because I had spent so much time away during the shoot of ‘Texas Rising.’ I was gone all last year in Durango, Mexico. That wasn’t really a family-friendly place.

“I raised my concerns about leaving my family again. They (‘Extant’ producers) were more than happy to put Hilarie in the show. So that gave us a bit of opportunity to be together as a family as opposed to me just going off and disappearing.

“‘The Good Wife’ will be perfect because it shoots in New York so we’ll all be close together.”

“Does it help dating an actor?” he repeated a question out loud. “Yeah, because the hours are dumb. Travel is dumb. If I seem to have been with people who are in this business, it’s because they are certainly more understanding than most about why I have to leave and how long I have to be gone for.

“And they understand that love scenes … aren’t real and mostly a pain in the ass. But it will always be awkward. There will always be an eyebrow raised. But we get through it. She does her own thing. She has her own kissing scenes. You just have to deal with it.”

For someone blessed with a funny bone, Jeffrey appreciates that trait too in Hilarie. “She certainly has a great sense of humor,” he said, beaming. “Anybody who’s going to be with me best have a sense of humor. I’ve yet to work with Julianna, but I imagine she has a sense of humor. Halle is friggin’ hilarious. I truly have never laughed so much on the set as I did with Halle.

“When you’re working those kinds of hours and those many days for that length of time, if you can’t go to work, have fun and laugh, that’s a tough gig. You want to try to have a good time.

Since “Extant” deals with robotic sons and there’s that current TV obsession with zombies, Jeffrey was asked what the popularity of shows about robots and zombies says about the collective pop consciousness.

“The apocalypse is coming!” cracked Jeffrey who lives on a farm in Hudson Valley, New York. “Zombies and ‘Star Wars’ are the topic of discussion with my kid 24/7 at my house. He’s convinced that the zombies are coming, which is my fault. One night, I screwed up huge. My kid was in bed sleeping with me. It was just him and me and it was very late. It was like 3 in the morning. I was watching ‘The Walking Dead’ and he had been out cold for hours.

“I was like, I’m going to watch a little bit of this. It was a scene where the zombies ate the horse. I hear this ‘Ugh,’ this little grunt. I looked over and his eyes were this big. I had no idea how long he’d been watching.”

Since then, Augustus has become obsessed with zombies. “Every day, he talks about the zombies coming and they’re going to eat a horse. We live on a farm so I’ll have you know that I’ve had to put up extra fences just to appease him and say, ‘That’s a zombie-proof fence right there.’

“He thinks I’m a zombie killer. It’s funny when you have a 5-year-old kid—he doesn’t quite know what I do. He knows that I played The Comedian. He thinks I’m a superhero and is convinced that I’ve got a superhero lair underneath the mountain where we live. He visited the set of ‘Texas Rising.’ I got him on a horse with me so he also thinks I’m a cowboy.

“We live on this huge ranch and I’ve got issues with coyotes and bobcats attacking alpacas. So I’ve got a couple of firearms locked away in a safe but he’s seen them. He’s like, ‘That’s my dad’s. He kills zombies.’ He’s obsessed with that so I don’t know what that says about me as a father or the society. But everybody seems to be obsessed with zombies and outer space. The apocalypse is coming and it’s probably going to happen on my farm.”

Jeffrey repeated a compliment: “He’s got a badass dad.” But he added with a grin, “That’s what he thinks.”