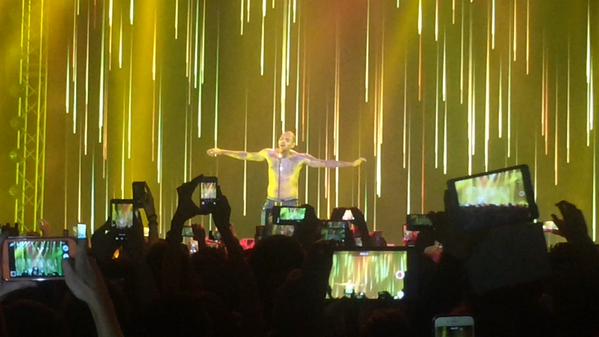 American recording artist Chris Brown, who staged a concert on Tuesday night at SM Mall of Asia (MOA) Arena in Pasay City, was stopped on Wednesday afternoon from leaving the country for his Hong Kong concert.

The Grammy-winning R&B artist was advised by the show’s promoters not to leave his room at Nobu Hotel in City of Dreams because he had been put on the watch list of the Bureau of Immigration, a source with direct knowledge of the incident told the Philippine Daily Inquirer.

The reason for ordering Brown’s name to be on the BI watch list, said to have been signed by Justice Secretary Leila de Lima, remained unclear to this source. Brown’s concert promoters have proceeded to the DOJ to know the full story.

The source said that Brown had no warrant of arrest but could be detained at the airport for questioning.

Pending clearance from the DOJ, the promoters were hoping that Brown would be allowed to depart Manila by Monday, July 27, the source added.

Sources at the immigration bureau, however, said that Brown had become a subject of a Department of Justice (DOJ) lookout bulletin for an estafa complaint filed against him for failing to show up in a Dec. 31, 2014, Philippine Arena concert which he top-billed.

One source said that the lookout bulletin indicated that the criminal complaint had been for the foreign artist’s alleged “deceitful misrepresentations and swindling.”

Brown was supposed to leave at around 2 p.m., Wednesday, on a Gulfstream IV aircraft, parked at a private hangar in the Ninoy Aquino International Airport general aviation area near Terminal 4.

Apart from his Hong Kong concert on Wednesday night, he has performances scheduled in Macau, Beirut, Cyprus, and the Netherlands. He announced on his Twitter account that he had rescheduled his July 25 concert in Jakarta due to “safety concerns.”

The complaint against Brown stemmed from a New Year’s Eve show he cancelled at Philippine Arena in Ciudad de Victoria, Bocaue in Bulacan, organized by the Iglesia ni Cristo.

He was supposed to be the main act in the “2015 Philippine Countdown,” which featured local artists and a pyro-musical display.

Brown had claimed that he lost his passport a day before his supposed flight to Manila from Los Angeles for the concert.