K-pop idols to star in musical ‘In the Heights’ 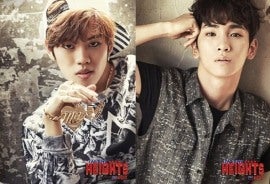 A slew of K-pop idols will star in the Korean production of Broadway musical “In the Heights.”

The star-studded musical will feature Key of SHINee, Chen of EXO, Infinite members Jang Dong-woo and Kim Sung-kyu and Luna of f(x), alongside experienced musical stars.

The Tony Award-winning musical “In the Heights” tells the tale of a Dominican-American neighborhood in New York City, fusing energetic dance moves with a vibrant score. The musical will raise its curtain at the Blue Square Samsung Card Hall in Hannam-dong, Seoul, on Sept. 4.