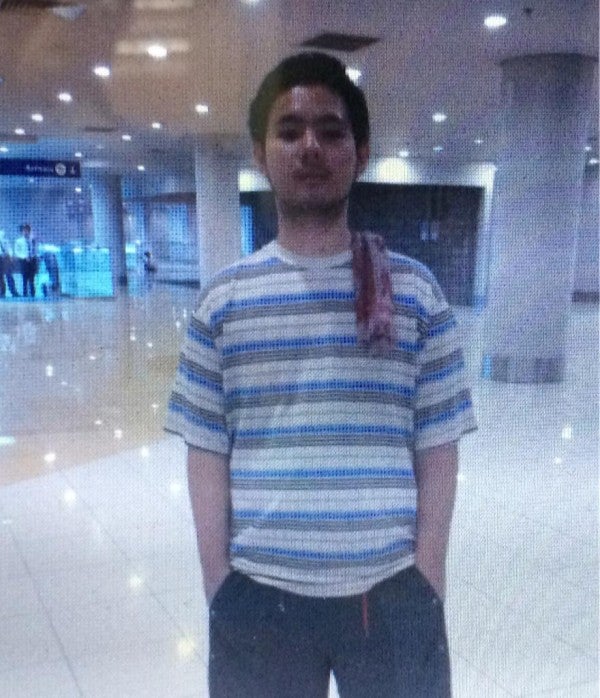 For four days Jiro Manio, whose real name is Jiro Katakura, 23, has been wandering inside the NAIA terminal 3 living through the kindness of strangers, mostly employees.

Clad in a hand-me-down shirt over shorts with a towel slung over his shoulder, Manio has been roaming the terminal lobby where the strip of fastfood restaurants are located, hoping for leftovers.

NAIA terminal 3 security guard Frank Sorca, who initially recognized Manio, told reporters that he pitied the actor when he saw him wandering around the airport.

“He looked as if he hasn’t had a decent meal and his clothes were dirty,” he recalled, adding that he fed Manio, gave him clean clothes, and accessories for hygiene.

But he only used the clothes and took the food, refusing to bathe, clean himself or even cut his nails.

Sorca said that when he asked why Manio was staying at the terminal, the actor told him that he had left home because he had enemies there.

When he turned up at the terminal, he had bruises on the body, apparently from having been beaten up. He quoted the actor as saying that he did not want to leave the terminal because he would only get hurt outside.

“But when I asked him again at a different time, he told me a different story. He constantly changes his answers,” the security guard said, hinting that the actor might be mentally unstable.

Building attendants and security guards at the terminal have been chipping in to give him food and other basic necessities out of pity.

But the actor apparently has no idea why he is being shown kindness or why he even catches attention.

When asked if he was an actor, he insisted he wasn’t and asked for evidence to prove he was. He even suggested that he might just look like the actor.

In 2004, then 12-year-old Manio won the Filipino Academy of Movie Arts and Sciences (FAMAS) Award for best child actor in 2004 for his role in the movie Magnifico and won the Gawad Urian and Luna or Film Academy of the Philippines best actor awards for the same film that year.

The actor went into rehabilitation for drug abuse in 2011, undergoing therapy for a year.

Who is Jiro Manio?