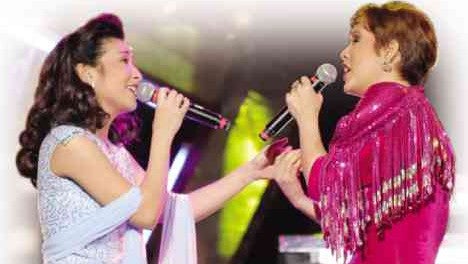 Monica Cuenco, who plays Dorina Pineda in the stage adaptation of “Bituing Walang Ningning,” couldn’t have possibly asked for a more fitting role to begin her foray into theater, because their lives, the young singer pointed out, practically mirror each other.

“We both came from a modest back ground—she peddled sampaguita; I sold puto and siopao. We also share the same dream: being onstage, singing for people,” Monica told the Inquirer shortly after the musical’s recent gala premiere at Resorts World Manila’s Newport Performing Arts Theater.

More importantly, the two ladies are avid fans: Dorina to her idol-turned-rival Lavinia Arguelles; and Monica to Sarah Geronimo, who played the same character in the 2006 TV version of “Bituin”—which was originally a 1980s comic series written by Nerissa Cabral.

“I’m a Popster,” Monica declared, referring to the name used by Sarah’s supporters. “I know how it feels to be a huge fan… it’s like playing myself.”

Monica also has tremendous respect for Sharon Cuneta, who turned Dorina into one of pop culture’s most beloved characters via the 1985 blockbuster movie by Emmanuel H. Borlaza.

It’s the same film that gave us that famous scene that had Lavinia (Cherie Gil) splashing water at Dorina, while uttering that iconic line: “You’re nothing but a second-rate, trying hard copycat!”

Curiously, Monica’s first stab at stardom also involved Sharon: The 20-year-old newbie finished second runner-up in the 2010 talent search “Star Power,” which the Megastar hosted. “I haven’t seen her since. I hope to bump into her again to say ‘Hi,’” related the mild-mannered Cebuano singer, adding that she would love for Sharon to watch one of her shows.

“That would be shocking, overwhelming. I hope to make her proud,” said Monica, who was plucked among hundreds of hopefuls who auditioned for the role earlier this year. “Just don’t tell me beforehand!”

After “Star Power,” Monica guested in the Sunday noontime variety show “ASAP.” However, she decided to return to the province upon realizing that she wasn’t ready yet for show biz. “I vowed to return as soon as I was prepared to face the challenges. And here I am now,” she said.

Monica considers the musical her biggest break yet. And though she has no theater background, she said she instantly felt at home, thanks to her coactors who embraced and nurtured her throughout.

“I’m thankful to our director Freddie Santos, and my costars Cris Villonco (Lavinia), Mark Bautista (Nico) and all the others. I’ve learned a lot and they didn’t make me feel left out,” she said. “It’s heartening to be with artists who inspire me to work harder.”

As part of landing the role, Monica also inked a P1-million-worth movie and recording contract with Viva Entertainment, as well as an artist contract with Full House Theater Company Entertainment and Productions. Asked if she sees herself becoming a star in the near future, she said: “I don’t think about that right now… I’m simply grateful for the opportunities given to me.”

Monica was orphaned at the age of 8, and was raised by her aunt. And so her priority, she stressed, is to give her family a more comfortable life. “Fame is not important in the long run… [we choose] needs over wants. What truly matters is love,” she said.