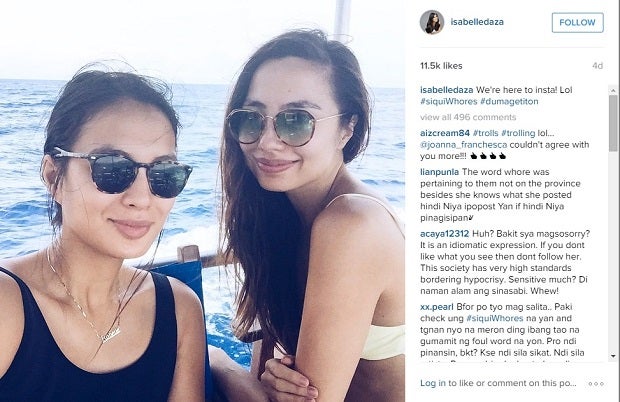 Some didn’t find it punny.

Actress Isabelle Daza has drawn mixed reactions from netizens over an Instagram post she made during her trip to Siquijor over the weekend.

Daza on Saturady posted a photo with her cousin Martine Cajucom with the caption: “We’re here to insta! Lol #siquiWhores #dumagetiton.

The hashtag “siquiWhores” is an apparent play on the words Siquijor, an island province in the Visayas, and whore, which means prostitute.

Many netizens slammed Daza for the post, which could be taken to describe the people of the province.

Others defended the TV celebrity saying it was not her intention “to malign the people of Siquijor.”

Siquijor Vice Governor and singer Dingdong Avanzado, in a statement posted on his Instagram, asked Daza to clarify her intentions.

“Before jumping into conclusions, I would like to hear directly from Ms. Daza whether the offensive term  #siquiWhores is a description of herself and her companion or a judgment to my beloved people of Siquijor, ” Avanzado said in his post.

He said every citizen of Siquijor “deserves a clarification” from Daza.

“As the vice-governor of the province, I am worried on how such a foul and offensive word would damage the reputation of the Siquijodnons in the long run.”

Daza has yet to issue a statement on the issue.

Read Next
Don’t use my music, Neil Young tells Donald Trump
EDITORS' PICK
House energy committee chair Arroyo bats for cheap electricity
Karding damage to infrastructure at P23M
Bongbong Marcos says PH ‘open for business’ with new Clark Airport terminal
Individuals affected by ‘Karding’ now over 157,000
Reignite your passion with the vivo Y35
Newbie gamers are in for a treat with the power-packed feature of vivo Y16
MOST READ
Angelica Panganiban ‘duguan, sugatang mom’ one week into breastfeeding
LPA enters PAR, may develop into tropical depression
Badoy not with Office of the President, NTF-Elcac, under Marcos admin — solon
Charges readied vs gov’t guard with P290-M deposits
Don't miss out on the latest news and information.