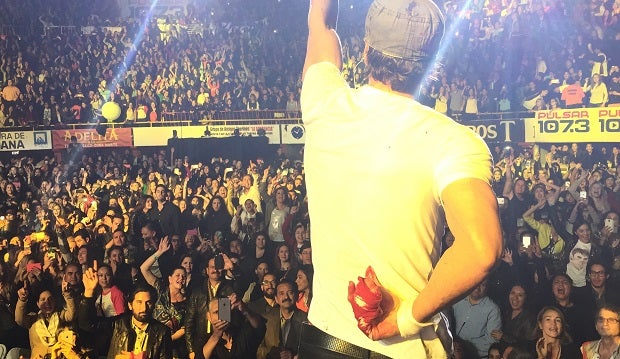 In this photo provided by Francis Ramsden, Enrique Iglesias performs while holding his bloodied and bandaged right hand behind his back during a concert in Tijuana, Mexico on Saturday, May 30, 2015. His injuries have been found worse than expected. AP

LOS ANGELES, United States – Pop star Enrique Iglesias will need weeks to recover after injuries suffered from a drone during a concert turned out to be worse than feared.

“His recent surgery lasted longer than expected since the damage ended up being a bit worse than initially assessed,” said a statement posted Tuesday on the Spanish-born, Miami-based singer’s website.

“He suffered a fracture that needed to be corrected in addition to the reconstructive surgery. He will be recovering during the next few weeks, but a full recovery is anticipated,” it said.

The singer reposted messages on Instagram of fans with get-well messages written on their hands.

Iglesias, who turned 40 last month, was injured Saturday at a concert in Tijuana, Mexico, as he grabbed a camera-equipped drone on stage.

The singer frequently pulls off the trick to give fans a better view of the stage, but he touched the wrong part of the drone, slicing open several fingers and forcing the sex symbol to leave the stage with his hand wrapped in a bloody T-shirt.

Iglesias, who was transferred to Los Angeles to see a specialist, has been touring since early 2014 to promote his album “Sex and Love.”

He is not scheduled to perform again until July 3 in Mexico City.

The youngest son of Spanish singing legend Julio Iglesias and his first wife, Filipina socialite Isabel Preysler, the younger artist has emerged as one of the top Latin crossover stars with fan bases for his dance numbers sung both in Spanish and English.

Read Next
Kim Kardashian catches fire, literally; Pharrell to the rescue
EDITORS' PICK
New Year, New Rediscoveries
WHO says fabric facemasks still work against virus variants
1,797 more Covid-19 infections raise PH active cases to 33,603
UP president challenges AFP claim on Reds’ campus infiltration
Is your company a growth champion? Stand up and be recognized!
Acer Philippines welcomes you to its first flagship store
MOST READ
Wife stabs husband after seeing her younger self in old photos, thought he was cheating
NBI files raps vs top execs of 2 tech firms
Ate Vi’s message to those against ABS-CBN’s franchise renewal
UK Covid-19 variant already detected in PH as early as Dec. 10, says expert
Don't miss out on the latest news and information.