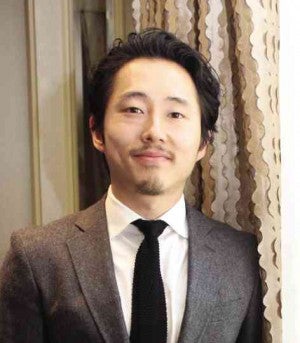 YEUN. Finds it fun and interesting to play a character “so true to his convictions.” RUBEN V. NEPALES

LOS ANGELES—“Oh, man. Goodness,” a flushed Steven Yeun said. The actor, who plays Glenn Rhee in “The Walking Dead,” was cool and composed earlier in the interview. But, asked about how some Asian-American actors like him are now considered sex symbols as well—a contrast from the earlier Hollywood stereotypical depiction of Asian men as asexual—Steven was thrown off a bit at first.

“Personally, sex symbol to me is always an interesting thing,” he began, grinning, as he regained his composure. He looked sharp in a gray suit, white shirt and black tie on this morning in LA. “It’s great. I think there’s a lot of very sexy, handsome Asian-American men.”

“And I’m not talking about myself,” said the actor, who’s represented by Peter McHugh, a Fil-Am who’s a top talent manager in Hollywood. Peter, who belongs to the political Cayetano clan in the Philippines, was seated in the back of the room. “There are others. I’m glad that I get to play some part of that in the spectrum. I’m not even trying to be self-deprecating. I just don’t hold myself to that place.”

Melissa McBride, who was paired with Steven in this interview, suddenly said, “I do.” That flustered Steven even more.

On the age-old question of whether things are improving for Asian-Americans and other actors of color in Hollywood, Steven said, “It’s a great time right now to lay down that foundation. There have been many wonderful actors and actresses before this generation who have paved the way. Unfortunately, they didn’t have the opportunities at their fingertips.

“I’ve been very fortunate to hit it in a generation where it’s not completely abnormal to see an Asian-American on television. What’s been nice is that this particular character, Glenn, doesn’t have to have an accent, doesn’t have some weird stereotypical disability or anything like that. He’s just taken at face value as an average person.”

Steven was born in Seoul, Korea, but he grew up in Michigan. “I have a very large sense of pride for being Korean but, at the same time, I am American,” he stressed. “The struggle for me was not necessarily to identify with my Korean side, because that is inherent in me.

“The hardest thing when I was growing up was to identify how I got in this American spectrum. You think you overcompensate, sometimes.”

On his Glenn character, a pizza delivery man before the zombie apocalypse, Steven pointed out, “The surprising thing that happened to Glenn was how fervent he is to stay true to his heart. He has a lot of reasons to go in the direction that Rick (Grimes, played by Andrew Lincoln) had gone to save or protect his family. This is what survival is, but it’s really fun and interesting to play someone unapologetically true to his convictions.”

The 31-year-old was especially compelling in what’s known as “the revolving door scene,” in which he witnessed one of his friends being grabbed from his grasp and attacked by the zombies.

“What I really like about our show is that, when we perform as a complete company, we are all into it pretty deeply, like during the revolving door scene and many other scenes that we’ve done that are just as intense,” he said. “Every single person in that room is focused on making sure that this is the greatest scene that we can shoot at the time.”

On a lighter note, Steven was ribbed about his visit to a spa in LA’s Koreatown for a segment on “Conan.” He and host Conan O’Brien stripped down to experience a thorough Korean scrub, among other things. “It was rife with comedy in there,” he said. “A lot of male nudity, so it was inherently funny. It was as fun as that can be. Conan is wonderful!”

Reflecting on his run so far in “The Walking Dead” which began in 2010, Steven said, “I feel very blessed to be even a part of this show as long as I have. Whatever direction they decide to take Glenn to, whether he stays or leaves anytime soon, I’m onboard to do that either way. So, there’s no real fear for me. There’s just excitement on whatever we’re doing!”