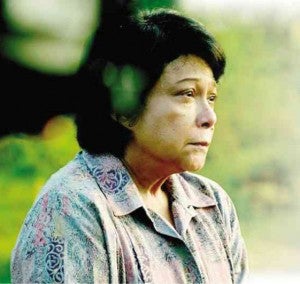 Mendoza, who is already back in Manila, told the Inquirer that he is “happy and honored” that his film was able “to bring home an award from Cannes.”

“Kahit papaano, nakapag-uwi tayo ng award,” said Mendoza, who was already sleeping before accepting a call from the Inquirer.

He said he had instructed producer Larry Castillo, who is still in France, to “dedicate the award to the people of Tacloban and other survivors of supertyphoon ‘Yolanda’ (Haiyan).”

Mendoza recalled: “When I gave a speech before the film’s premiere last May 19 in Cannes, I told the audience that we made this film for ‘Yolanda’ survivors.”

Mendoza related that it is his fourth time to win an Ecumenical Prize from Signis/Interfilm: For “Masahista” in Brisbane in 2006; for “Foster Child” in Canary Islands in 2008; for “Lola” in Fribourg.

“In every festival in different countries, the Ecumenical Prize or Signis/Interfilm award is handed out,” he recounted. “Perhaps the jury cited ‘Taklub’ for its spiritual message.”

According to the citation, the Filipino film, which follows the intersecting lives of three “Yolanda” survivors, was commended by the ecumenical jury: “For the sensitive portrayal of individuals and communities working for life in the midst of suffering and death in the shadows of natural catastrophies in the Philippines.”

According to its web site, Signis is a non-governmental organization with members from 140 countries. The award was created by Christian filmmakers, film critics and other film professionals. The award’s goal is to “honor works of artistic quality which witnesses to the power of film to reveal the mysterious depths of human beings through what concerns them, their hurts and failings as well as their hopes.”

Producer Castillo related that the Ecumenical Jury chose three films from all the films included in the festival. “Two came from the Main Competition and ‘Taklub,’ was the only one from Un Certain Regard section.” Nanni Moretti’s “Mia Madre” won the Ecumenical Jury Prize while Stephane Brize’s “La Loi du march” from the Main Competition was given a Special Mention prize as well.

“Taklub” topbills superstar Nora Aunor who was praised by international critics for her portrayal of a mother who lost her children to the calamity.

Here are the winners in the Un Certain Regard section of Cannes:

A shade at Roque? Vice asserts being a comedian, not a clown

Graft complaint filed vs Diokno, other BSP execs for P1.75-B contract for IDs