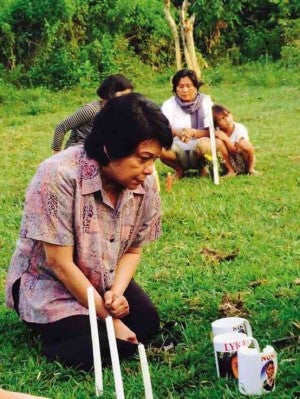 NORA Aunor plays a “Yolanda” survivor in “Taklub.” She recalls that the audience reaction to “Bona” in Cannes 1981 was positive. Photo by Gianfranco Morciano

It’s official: The Philippines has an entry in this year’s Cannes.

Brillante Ma. Mendoza’s “Taklub” is one of two films from Southeast Asia (the other is Thailand’s “Cemetery of Splendour,” directed by Palme d’Or winner Apichatpong Weerasethakul) included as additional entries in the Un Certain Regard section.

After weeks of rumors and speculation, Mendoza can now heave a sigh of relief.

Days before the official announcement on Thursday night, Mendoza was on needles and pins after news of “Taklub’s” inclusion was leaked online.

“Baka ma-technical ako,” a worried Brillante Ma. Mendoza said upon learning of the premature announcement on the Internet.

On Tuesday, it was leaked online that Mendoza’s latest film “Taklub” was an additional entry in the Un Certain Regard (UCR) section of the 68th Cannes International Film Festival, to be held May 13 to 24.

The premature announcement created quite a ruckus among netizens.

The prestigious French festival unveiled the 2015 lineup last week and the Philippines was not listed in any category.

Then news of “Taklub” landing in UCR was posted on a news website. It was pulled out the next day, but it had spread in social media by then.

The leak preempted festival organizers’ official announcement (on Thursday, Manila time). For the production team, this was cause for concern. Mendoza sent fest organizers an explanation but has not received a response at press time.

International festivals are very strict about making such announcements and require utmost confidentiality.

In any case, “Taklub,” which tells the story of survivors of Supertyphoon “Yolanda” in Tacloban, was envisioned as Mendoza’s grand comeback in Cannes, where he won best director for “Kinatay” in 2009.

Mendoza was no stranger to Cannes even then, having joined twice before—in the Directors’ Fortnight section with “Foster Child” in 2007 and in the Main Competition with “Serbis” in 2008.

Weeks before Cannes unveiled its lineup this year, various foreign pundits, including ion.cinema.com and Paris Match, had predicted Mendoza’s participation in the high-profile film event.

“Taklub” is also seen as the return of actress Nora Aunor to the French Riviera, 34 years after Lino Brocka’s “Bona” premiered in the Directors’ Fortnight.

“‘Bona was supposed to be in the Main Competition,” Aunor told the Inquirer. “But I ran out of money and could not have the film subtitled in time.” (The actress, through her NV Productions, produced “Bona.”)

Aunor recalled that the audience reaction to “Bona” was largely positive. “[French cineaste] Pierre Rissient, who brought Lino’s films to Cannes, told me that ‘Bona’ was his favorite among my films.”

She recalled that with the help of Brocka and Rissient, she was able to sell “Bona” to a foreign distributor for $45,000.

She is looking forward to revisiting Cannes. “Kristian Cordero, director of my Bicolano film ‘Hinulid,’ has adjusted our shooting schedule so that I can go,” she said.

Will Aunor make it to the Cannes red carpet next month, which coincides with her 62nd birth anniversary (on May 21)?

It will be a fitting present for the Superstar, who holds the distinction of being the only Filipino actress whose films have been shown in the world’s top three festivals—Cannes (“Bona”), Berlin (“Himala”) and Venice (“Thy Womb”).