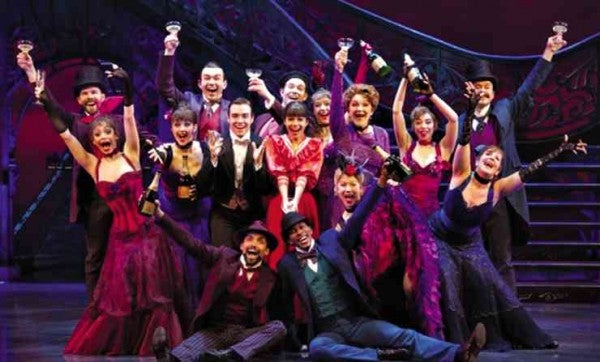 THE ACTRESS (center, second row) with the cast of “Gigi.” MARGOT SCHULMAN

LOS ANGELES—“This is the hardest I’ve ever worked, hands down,” Filipino-American Vanessa Hudgens said about performing the title role in her Broadway debut, “Gigi.” But the singer-actress stressed that she is having the time of her life portraying a free-spirited Parisian teen at the turn of the 20th century.

The role was played by Audrey Hepburn in a Broadway production that opened in 1951 and Leslie Caron in the film that won nine Oscars in 1958, including best picture. The first film adaptation of Colette’s 1944 novella was a 1949 French movie.

Every night except Monday at the Neil Simon Theatre, Vanessa gets to sing Alan Jay Lerner and Frederick Loewe’s songs and wear Catherine Zuber’s elegant Belle Epoque Paris costumes in “Gigi,” adapted by Heidi Thomas and directed by Eric Schaeffer.

The actress has come a long way from her first “stage” experience in preschool when she played Mother Mary and sang “Away in a Manger.” She said that her family—dad Greg, mom Gina (nee Guangco; she’s from southern Philippines) and sister Stella—is thrilled about the “amazing opportunity” to debut on Broadway.

More information about the show, which moved to New York following its run at the Kennedy Center in Washington, DC, and ticket details are on gigionbroadway.com.

Below are excerpts from our interview with Vanessa, who currently sports a becoming blunt bob as she revels in living, if temporarily, in New York:

How does this musical help you grow as an artist and as an individual? What do you miss or not miss about your pre-“Gigi” lifestyle?

I’ve grown so much and try to take moments in every night to be truly grateful. But I do miss my home in Los Angeles, driving around with good music and the windows down… working out and my friends and

What are you learning from this whole experience?

Learning to let go of expectations. You work so hard to get moments just right and it doesn’t always happen. My yoga instructor said expectations are the mother lode of disappointment. So I’ve found that I just need to put in all the work I can and allow things to just happen.

SHE RECALLS, “I was extremely nervous going into the room, felt very grounded in my audition and left feeling like I did my best!” AFP

It felt like magic. There was celebration and excitement in the air. It was such a thrill. I wasn’t nervous because being on stage feels like home to me.

How did you feel on your first curtain call?

I was blown away. It felt like all my emotions were flowing at the same time. I got quite emotional. I might have cried a little. It’s such an honor to be on a stage with such history.

What have been the highlights of the run so far?

Opening night’s curtain call. It was so emotional… a moment I will never forget.

How supportive is your family?

They are absolutely thrilled, overjoyed and quite proud. I think the whole family is excited for this amazing opportunity for me. They’ve been so supportive. My sister has seen the show at least a dozen times.

How did you react when you landed the role? After all, you were quoted as saying, “I called Evan (Hainey, her manager) back and said: ‘Evan, do you really think I should go do this? I don’t see how they see me as a teen in Paris in the late 1800s. I’m Filipino.’ He said, ‘No, they’re interested.’”

I screamed and called my mom, dad, sister and boyfriend (Austin Butler). I was thrilled. I couldn’t believe it.

How many rounds of auditions did you go through? How did you prepare?

My audition went well, I thought. Not outstanding but well. I only went in once. I read two scenes for them when I had only prepared one. They wanted me to do another one so I sat in a room for 10 minutes and worked as hard on it as I could.

I sang “The Parisians.” I was extremely nervous going into the room, felt very grounded in my audition and left feeling like I did my best! I left it up to fate and it did me well.

Did you have any fears at any point? How did you overcome them?

I was ready to embrace this role with open arms. Of course, I had moments of doubt, but I pushed them aside as quickly as they came in and put the work first.

To perform on Broadway was on the top of your bucket list when you were 15. What kind of Broadway dreams did you have when you wrote that bucket list?

I wanted to originate a role and because our version of Gigi has been rewritten, it felt like a new character.

Were you aware of the 1958 movie “Gigi” before this role came along?

I watched the movie before I went into the audition. I love what Leslie Caron did with

Gigi so I tried to carry on the energy she brought to the film.

Are you inspired by the thought that Audrey Hepburn starred in the first Broadway adaptation of “Gigi”?

Extremely. I have several pictures of her in my dressing room. She was such an iconic woman who was so incredibly talented and hardworking. She inspires me every day.

What is it like wearing all those elegant costumes?

I really admire [those] who wore the dresses of that time. They’re not easy to walk around in! Yet they are so beautiful, elegant and intricate. Truly stunning.

Which numbers in the show do you enjoy performing the most?

I love doing “I Never Want to Go Home Again.” I get to sing my heart out and do

ballet. It’s nice to go back to your roots.

You are known for your singing talent but tackling the lead role in a Broadway musical is an altogether different matter. How did you prepare for the role?

As soon as I found out that I got the part, I worked on my voice every day. I go to my vocal coach Eric Vetro once, sometimes twice a week.

What inspired you to go for a bob haircut?

Spring time! I love mixing it up. I also wanted something short, chic and sassy. I feel like the bob does that for me.

And finally, my favorite question to you in the past few years: when are you going to the Philippines and see your mom’s hometown and family?