How does one become a ‘Leading Lady’? | Inquirer Entertainment
Close
menu
search

How does one become a ‘Leading Lady’? 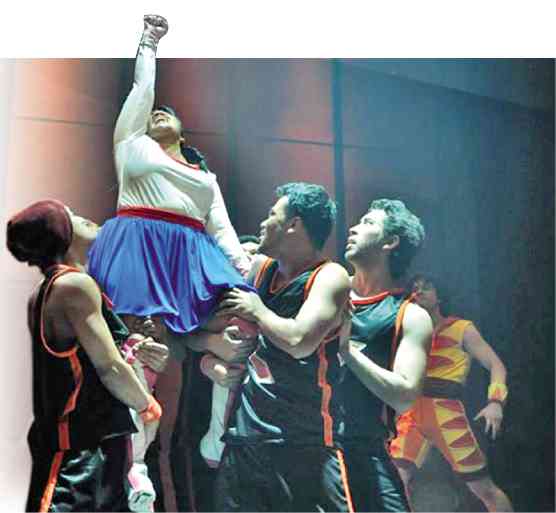 When I told my husband Rob Chien that he and I were going to see Dalanghita Productions’ “Kung Paano Ako Naging Leading Lady” at the Peta Theater in Quezon City on Sunday afternoon, he immediately asked: “Will I be able to understand it?” (He’s American, so it was a valid question.) I said that it’s about half and half, and that he’d be able to get everything. It was all about context. Thankfully, the show was in the hands of amazingly skilled actors, so he didn’t have a problem at all.

The musical (with music and lyrics by Vincent de Jesus and book by Carlo Vergara and Perterean Briñas, based on Vergara’s graphic novel of the same name) tells the tale of sisters Mely (Bituin Escalante) and Viva (Natasha Cabrera), and their respective run-ins with the superhero team known as Fuwerza Filipinas and the supervillains the Kayumanggilas.

Mely is hired as the Fuwerza’s new maid (apparently, superheroes can’t clean up after themselves despite being able to save the world), while Viva is the Kayumanggilas’ new pawn in their efforts to bring the heroes down. Both Mely and Viva carry their own sets of emotional baggage due to how they were each raised by their mother (May Bayot), as well as a previous romantic rivalry. And it all plays out in hilarious, dramatic and, at times, dark fashion.

There is one point in the show when the tone shifts from very light to very heavy, where the laughter that permeated the air only seconds before suddenly goes silent and cold.

The show’s major strength for me lies in the hands of the performers tasked to bring Carlo’s original paper-and-ink characters to vivid three-dimensional life.

Escalante has always been a force to be reckoned with on stage, and it fills me with joy that there is a role like this created for someone with her unique look and skill set. An incredible actress and singer, each word that comes out of her mouth, whether spoken or sung, isn’t ever gratuitous or taken for granted. She is gifted at making you laugh your face off, or cry a river of tears, and the sincerity with which she plays Mely can be felt from wherever you’re seated, never once descending into over-theatricality.

Cabrera was Escalante’s emotional match, but with a seemingly lighter, more buoyant energy. However, you could tell that there was something bubbling beneath the surface. Hers is a powerful voice put to good use here (and there are moments in the show when power is the primary requirement).

Bayot is ever-reliable in every part she plays, and Nanay is no exception. Nanay in her hands is complete, acted and sung with nuance and feeling.

Lauchengo-Yulo always carries every character she plays with the air of royalty and leadership, making her an almost typecast Madre de Dios. She also has a set of abs that threatens to upstage her every time she appears.

Eckstein is near perfection as Leading Man, as this role requires not just a six-pack and a jawline that any Hollywood star would envy, but vulnerability and humanity. He has most certainly grown from the ensemble tracks that he would regularly fill, and I’m hoping that he is offered more leading-man roles from here on.

Ocampo is effective in conveying the irony of being Nena: she’s a healer, but can’t heal her own broken heart. Borromeo is all sass and big hair, with her trademark big voice. Flores and Rodriguez occupy their roles with coolness (I mean come on, that bazooka is cool) and imposing physical presence, but betray themselves to be nothing more than teenage boys once safe at FF Headquarters.

Special mention must be given to Kakki Teodoro for playing the computer… she was perfect.

The villains—Senyor Blangko (Nar Cabico), Henyotic (Vince Lim), Jeryc Sans Rival (Elliot Eustacio), Marakas Marko (Red Nuestro), and Itak-Atak (Red Concepcion)—are the antithesis of the Fuwerza. Sure they have powers, but only with the help of Chemical Q, concocted by their scientist Henyotic. They are all “normal,” but with malevolent intentions, plagued by their own insecurities and the desire to quickly and artificially rise above them all.

Cabico is a master scene-stealer, having proven this as Didi in “Zsa Zsa Zaturnnah.” Senyor Blangko trips and falls all over the English language like a drunken party girl in heels that are way too high, and the results are only too hilarious.

Lim’s college-boy looks belie deeper, darker intentions; in short, he only looks harmless. It’s obvious his time as one of the Ryan Cayabyab Singers has shaped a voice that is not only strong but also pliant.

Eustacio, Nuestro and Concepcion carry their roles with aplomb, all with hilarious results. The Kayumanggilas’ second act opener is more than worth the price of admission. You cannot miss it.

If I have but one complaint, it is that the show is a tad long. With a running time of three hours (this is how long “Les Misérables” runs, and that’s with trims and cuts), one can get antsy. I’m sure the creative team (director Chris Martinez, production designer Tuxqs Rutaquio, sound designer Jethro Joaquin, lighting designer John Batalla, and choreographer Nancy Crowe) already has a laundry list in mind for the next runs of the show (for sure this show will, like “Rak of Aegis” before it, enjoy many reruns and will be restaged multiple times).

It’s unfortunate that in the Philippines, there is no such thing as a “preview period,” when for around three to four weeks the material is examined and reexamined on a daily basis every single day leading up to a show’s official opening night.

However, if composer-lyricists like De Jesus keep churning out world-class material like this (his Tagalog lyrics in particular are the stuff of poetry, which is masterly illustrated in the Nena-Leading Man-Mely trio where both English and Tagalog are used in the same song), previews may need to become a necessity, because a long-running original Pilipino musical would no longer be the stuff of fantasy. It would be a reality that would make so many theater performers and creators’ dreams come true.

That said, this would only happen if audiences support more original Pilipino plays and musicals. Our stories, our music, running for at least a year in the same theater is something I would like to see in my lifetime.

To the entire cast, crew, producers and creative team of “Leading Lady,” my most heartfelt congratulations, not only for a great show on a Sunday afternoon, but for offering us a glimpse into what is possible in the future, where the original Pilipino musical is seen as just as, if not more, fantastic face to face with shows from Broadway or the West End.

And we can proudly call it ours.