‘The Rich Man’s Daughter’ director: Love story of 2 women is more than just a show 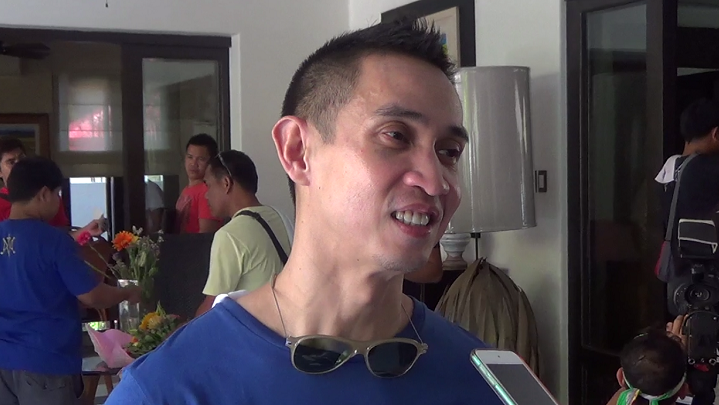 Director Dominic Zapata answers questions during an exclusive interview on the set of “The Rich Man’s Daughter.” NOY MORCOSO

FOR director Dominic Zapata, doing GMA Network’s lesbian-themed series “The Rich Man’s Daughter” is another opportunity to touch a life.

“We base it on people that we know. We deal with the show with a lot of sensitivity, because it’s an opportunity for us to open minds. To make people understand other people better. To make people respect other people,” Zapata told INQUIRER.net in an exclusive interview on the set of the said series at Ayala Alabang, Muntinlupa City.

Having directed “My Husband’s Lover”, the very first gay-themed series on Philippine television, Zapata said telling a love story of two women this time is more than a just a show.

“How do I touch a life? Maybe a lesbian who’s been having a difficult time dealing with whatever it is that comes with being a lesbian. The trials, the sacrifices to make with being a lesbian. If that makes them feel less alone by watching the show, for them to feel like, ‘Oh, there are people who understand me. In fact, there’s a show that echoes how I feel. That resonates the way lesbians feel, the way LGBT community feels,’ then that’s great. That’s what motivates me.”

“The Rich Man’s Daughter” tells the story of Jade Tanchingco (played by Rhian Ramos), an heiress of a rich Chinese family. She will be forced by her parents to marry her fiancé David (Luis Alandy). But her life will change after she falls in love with another woman named Althea (Glaiza de Castro).

READ: Rhian on screen partner Glaiza: I treat her like I would a leading man

The series’ pilot episodes from May 11-14 dominated household ratings in Mega Manila according to AGB Nielsen Philippines.

Contrary to his approach to “My Husband’s Lover” which depicted the sincere and serious personality of gay men, Zapata said “The Rich Man’s Daughter” presents lesbians’ lighter side.

“When you see your lesbian friends there’s always like, as Suzette (Doctolero, the head writer) says, there’s a veil. You really don’t know what happens inside them. With the veil is their armor of manhood. When [they] think [their] feelings are more masculine, [they] won’t show [their] emotions.”

Two women and a man

Zapata expressed there is nothing wrong about the love story between two women and a man, where someone gets hurts and someone gets chosen. In the process, he said, all of the characters get hurt because they are all capable of loving.

He recognized that it takes a huge amount of guts to tell that story because there is a lot of resistance.

“And why would I let that stop me from telling a story that has to be told maybe even ten years ago. The show is for our friends or children to know that we are in this society with these people. They also need our respect, our understanding. And you shouldn’t shun them, you shouldn’t look down on them, you shouldn’t avoid them.”

Not just for entertainment

Recalling an instance when he received a letter from a US-based Filipino priest who thanked him for his great work in “My Husband’s Lover”, Zapata said he will always do a show that represent all the marginalized sectors of society if given the opportunity.

“Because it makes me sleep better at night. It makes me feel better about myself. It makes me feel like I’m able to do something good in this world,” he said. “I don’t think this is just about entertainment anymore. This is about information.”