Rhian on screen partner Glaiza: I treat her like I would a leading man | Inquirer Entertainment

Rhian on screen partner Glaiza: I treat her like I would a leading man

Actress Rhian Ramos has revealed that she and costar Glaiza de Castro promised to each other at the start of shooting their series that they would have each other’s backs as they play their role as lovers on GMA network’s newest primetime drama “The Rich Man’s Daughter.”

“If there’s a scene that one of us has trouble with, we’ll talk about it and help each other,” Rhian told INQUIRER.net in an exclusive interview on the set of the series at Ayala Alabang, Muntinlupa City.

“I asked her what her favorite perfume was, so that I can get it and use it and hopefully when I pass by, she’ll go, ‘that’s pleasant!,’ so she will get attracted to me in some way,” Rhian said of Glaiza, her partner in the much-talked about series. 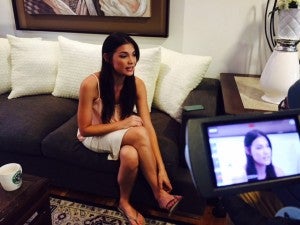 “We have our own tactics. I’m gonna try and use senses. When you already like a certain perfume, gusto mo na ’yun eh. So I’m gonna try and bring that attention to me. In my mind, I treat her like I would treat any one of my leading men,” she said.

“Before a scene where we get up close and personal, I’m at the side of the set, I spray perfume, I take a mouthwash, everything. I wanna treat her like I would treat any leading man I have.”

In “The Rich Man’s Daughter,” directed by Dominic Zapata, Rhian plays the role of Jade, an heiress of a wealthy family. Just as her marriage with David (Luis Alandy) is arranged by her father, she comes across Althea (Glaiza), a wedding coordinator, who she will have a deep attraction to.

Rhian said she and Glaiza were aware of each other’s abilities as actresses since they worked together on dramatic soaps before.

But the challenge to be “lipstick lesbians” (or homosexual females with strong feminine attributes) is still there, says Rhian, so they talk in detail about their characters, especially on building up their chemistry on-screen.

The pilot episode of the series, which aired on Monday, received a warm welcome from viewers and became one of the top trending topics on Twitter.

It introduced the viewers to the members of the Tanchingco family; the backstory of how Jade’s parents Oscar and Amanda met (Al Tantay and Glydel Mercado); the conflict between Jade and her brother Paul (Mike Tan), and the first meeting of Jade and Althea at the wedding of Gabriel (TJ Trinidad) and Pearl (Pauleen Luna).

Despite her experience in portraying leading lady characters, Rhian feels pressure over her new role.

“[I feel] a little bit [pressured], because I’ve never had a role like this. I’ve been in love stories before, just not with another girl. I just want to try and read it in the same way, ” she said.

“That’s how I know it’s important to me, when I’m getting nervous about it. I’m asking myself, ‘Is this my best?’ And that’s all I want, because it’s such a good story,” she added.

“And I feel like it’s not just any teleserye. I also feel like I’m going to be representing the feelings of many other girls that have probably gone through something similar and had to go through a stage of self-discovery. So I want to be as realistic as possible about it.”

Rhian says a gay or a lesbian couple are no different from the straight ones because a “love story is about love.”

“I don’t pay much attention on gender or anything. Love is love. You know, you have love for your family … you have the romantic kind of love, whether it’s for a boy or for a girl. And I’m just gonna play it as romantic love.”

According to Rhian, she has a lot of gay and lesbian friends and she doesn’t treat them differently just because of their sexual preference.

“I already know it’s not easy for them because everyone always has something to say. I’m personally not one of those people,” she said.

“I think the show is going to shed some light on the struggle, maybe the confusion at first. And then also what other people think about it, because when some people say that—‘what you feel is not right’—I’m sure it hurts,” she said.