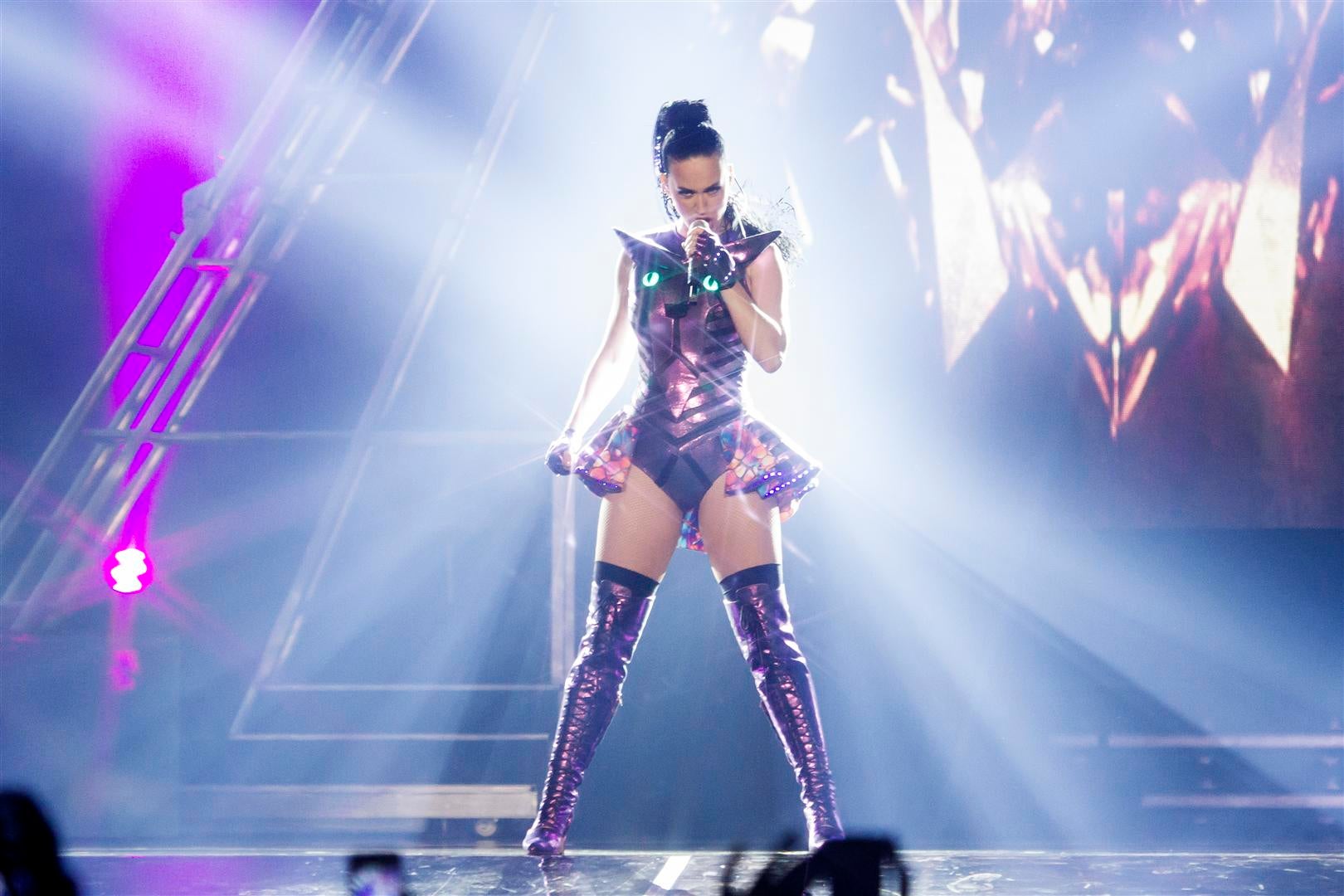 BULACAN, Philippines – Fine, fresh, fierce – Katy Perry has got it all unlocked. Over 30,000 fans trooped over to the Philippine Arena on May 7 to witness perhaps one of Katy Perry’s biggest shows from The Prismatic World Tour, as she herself was in awe. The Philippine Arena staged Katy’s production and psychedelic performances, with her being the first international solo act to perform at the venue. But the fun began way before the concert as Katy Cats from all over joined in the fun pre-show event at outdoor plaza of the Philippine Arena. At The Prismatic Zone, powered by Smart and Spinnr, fans came dressed up as Katy displayed their love for the pop star by singing and dancing along to her chart-topping hits. They also had a grand time taking a few poses by the photo booths or just plainly writing out their personal notes to Katy on the message wall. Fashion was the order of the day as select Guess patrons were treated to a day of music, food and drinks. Exclusive Katy Perry merchandise like shirts, light wands, and accessories were available on site. Concert goers also had a field day choosing from the countless food concessionaires, with Krispy Kreme, Yellowcab Pizza and Jamba Juice leading the pack.

Headlined by The Dolls, international DJ duo Mia Moretti and Margot brought the house down with their infectious beats, making the crowd all excited for an amazing show ahead. Known for her visual explosion of performances, Katy didn’t disappoint when she first came out and performed Roar to a packed Philippine Arena. Midway thru her show, Katy became a bit sentimental as she recounted the past year. “This is the biggest concert we’ve ever had,” Katy said as she waved to the roaring crowd. What makes the night even more special is that the date coincides with the first year anniversary since The Prismatic tour launched in the UK, as Katy revealed her dedication to her fans, “This night makes it even more special for us. We’ve been doing this tour for a year now and we never cancelled a show. Everyone came out and waited for this night. We know how important it is for us to show up!” Maximizing the stage with a runway, Katy floated, danced, jogged, and interacted with lucky fans while she belted out her hit songs impeccably. The whole production was an immense visual feast of colors, bright lights and special effects, with Katy displaying her irresistible charm in a display of sexy, glam and neon outfits. Taking command of the stage, she brought all her fans into her fantastical world of bedazzling production and nonstop entertainment. 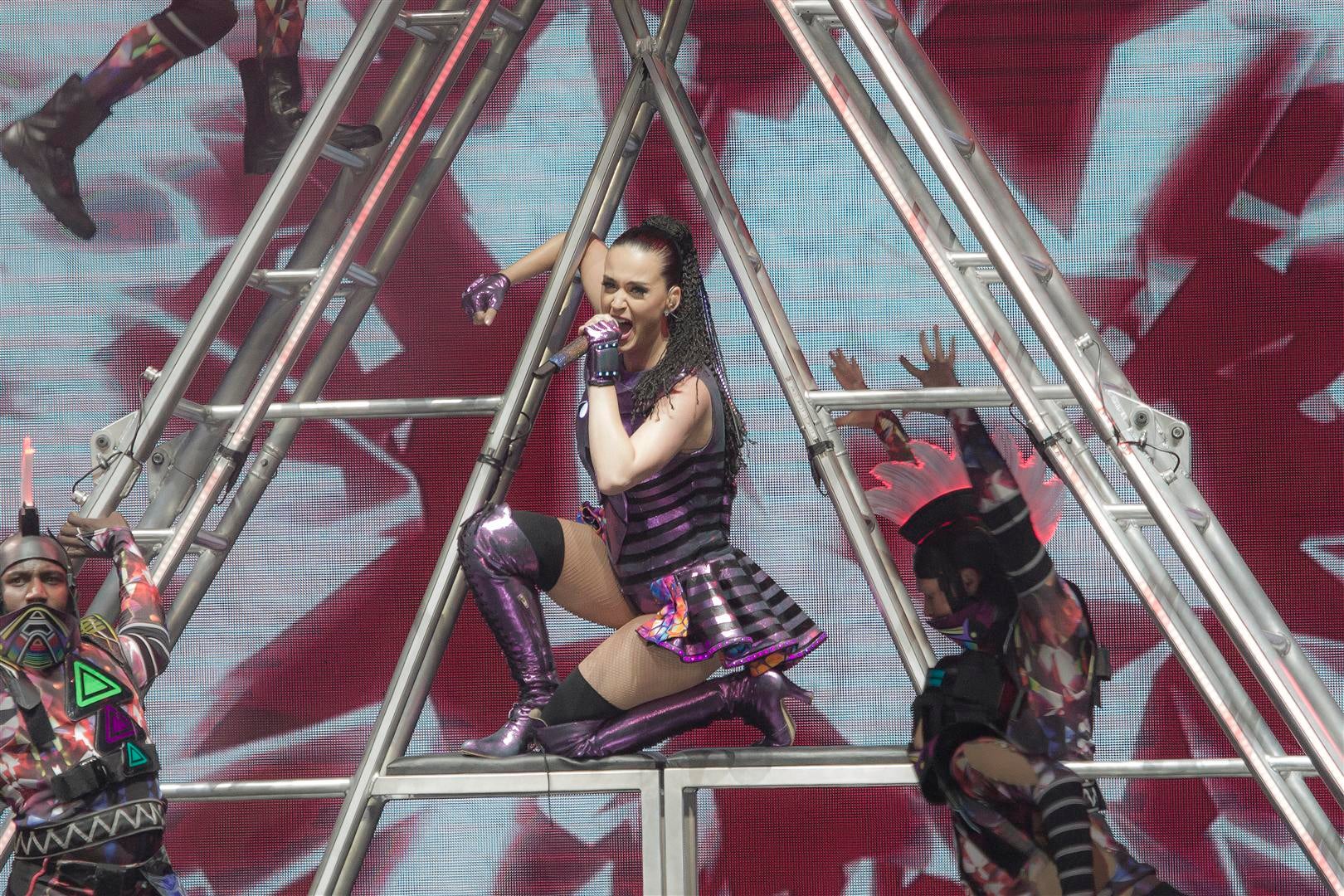 What could better open her show than the ultimate girl power song, Roar, where Katy came out decked in a svelte purple body suit with fluorescent hair, with soldier dancers in glow-in-the-dark uniforms. She then went on to sing Part of Me and Wide Awake, setting the supercharged theme for the whole night. Next up, Katy emerged as an Egyptian goddess on top of a golden horse. With laser light shooting all over the place, she sang Dark Horse and E.T. She then moved on to more upbeat versions of Legendary Lovers and I Kissed a Girl, with “curvy” female mummies accompanying her dance. As a tribute to her fans famously known as KatyCats, Katy transported her fans to “Kittywood,” where she appeared in a stunning cat suit and performed a jazz rendition of Hot and Cold and International Smile fused with Madonna’s iconic song Vogue. One of the most emotional parts of the night was her acoustic performance of The Grace of God, a mash-up version of The One that Got Away and Thinking of You, and Unconditionally, with the thousands of fans waving their lighted phones along with the song. 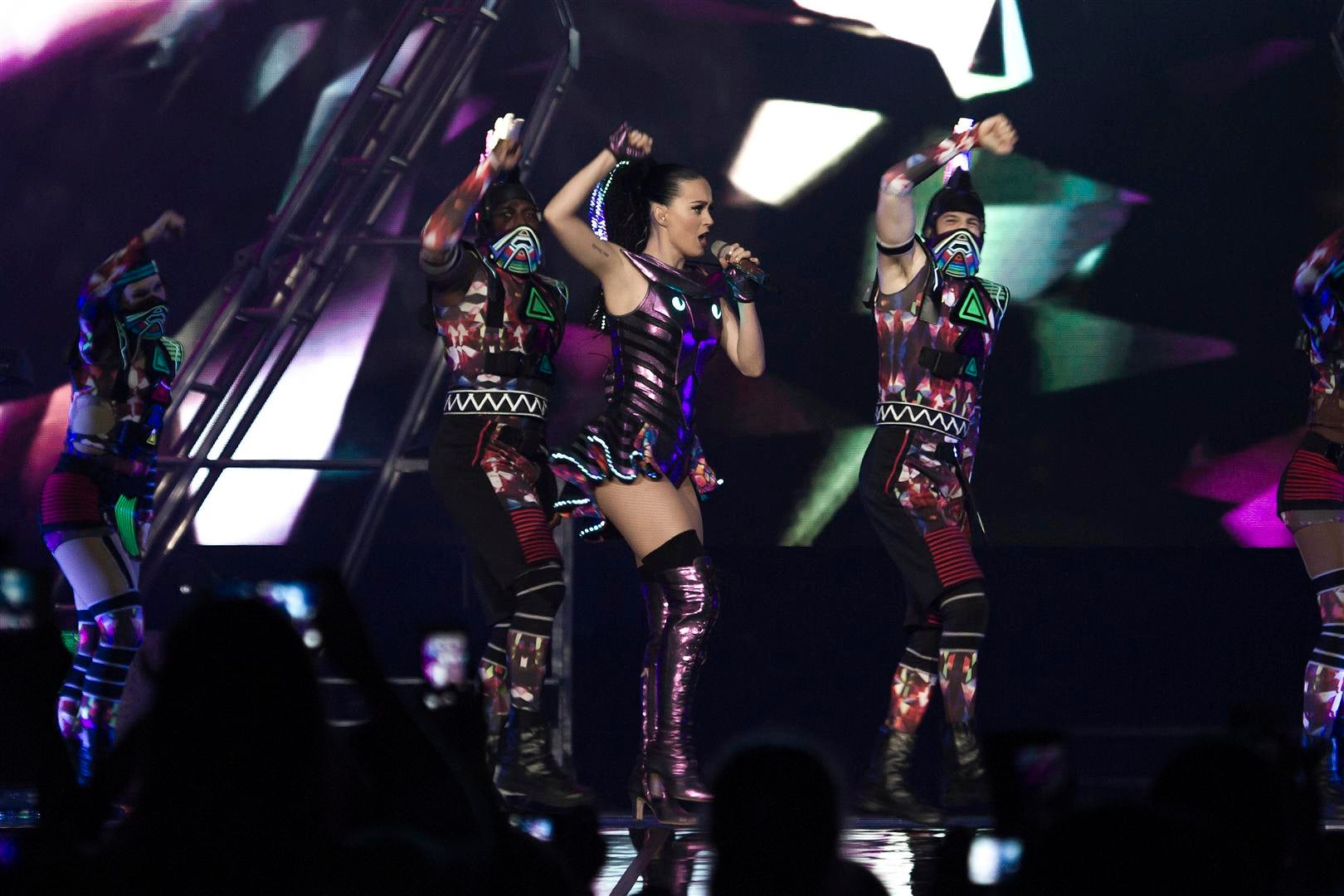 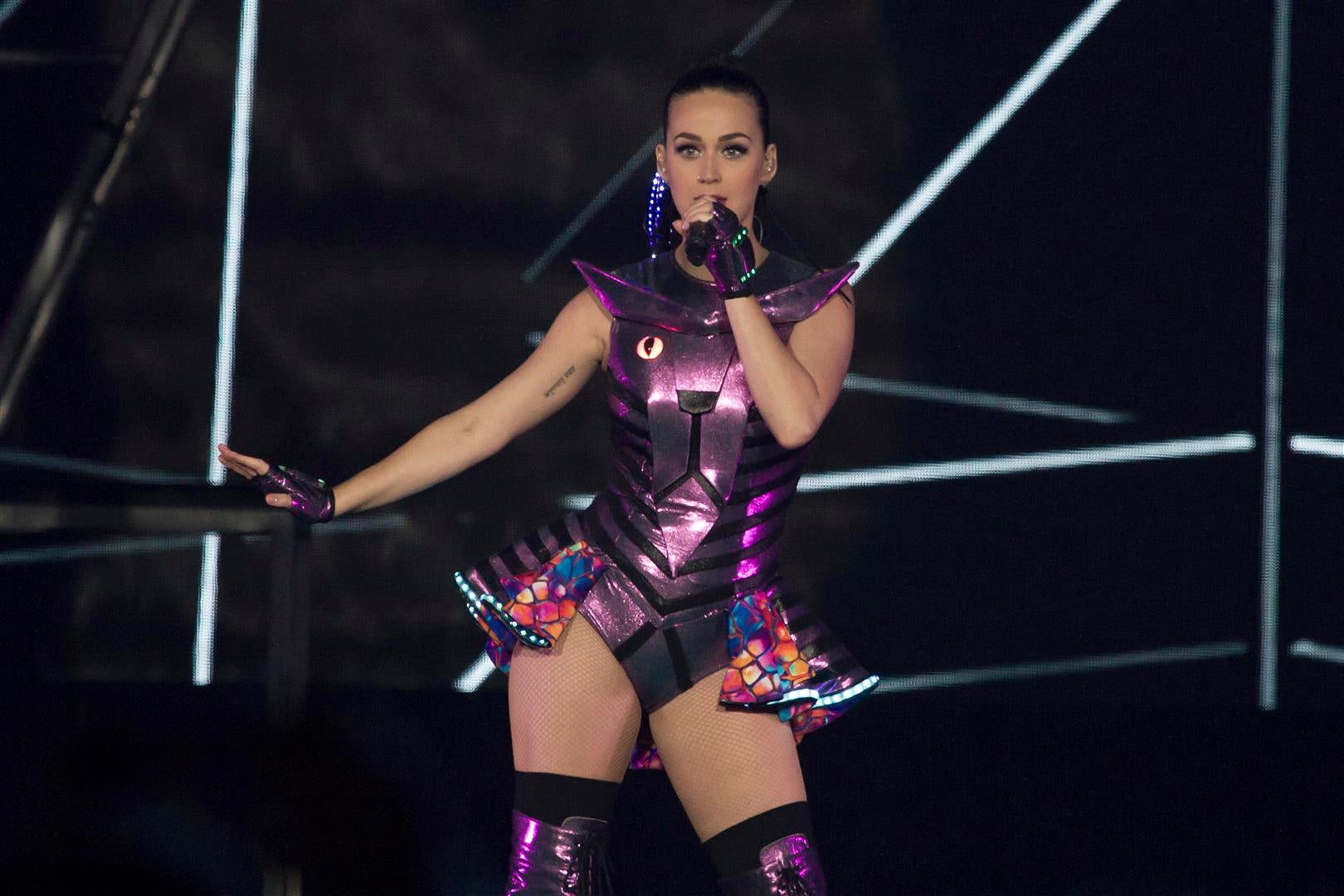 Wanting to learn a few Tagalog words, Katy surveyed the crowd and brought a fan to the stage who stood out for wearing a sparkly fish-bone suit identical to the one she wore to her Cat themed stage. Martee Viray, the 20-year-old fan from Rizal was obviously star struck. Unable to contain his words, he hugged Katy and stared at her for what seemed like an eternity. Katy even had to give him her bottled water for him to drink. Katy asked him how to say “hello” in Filipino, to which he cheekily replied, “Just say ‘hello!’” This made Katy and the crowd laugh, and she then asked him the word for “thank you.” He taught her how to say salamat, and Katy joked, “Salami! That’s my favorite too!” Katy then proceeded to take a couple selfies with Martee, who left the stage in a cloud nine.

Hyping up the crowd once again, Katy emerged in a bright neon outfit and high socks in her 90’s- inspired stage, with smileys on the screen and cartoon floaters up in the air. She performed Walking on Air, Last Friday Night, California Gurls, among others, with the dancers moving the big letters of Hollywood and forming various words like “YOLO” and “LOL.” Fans were all standing up and dancing at this time, as they can’t help but get swept up by Katy’s infectious energy. When Prism Vision played, fans from the VIP and Patron seats wore their special glasses to enhance the visual effects of the next performance – Fireworks. Katy wore a fireworks-inspired outfit that was visible from all angles on the stage. The screen lit up with an assortment of lights as Katy sang her most iconic and inspiring song, making it a perfect ending to a perfect night.