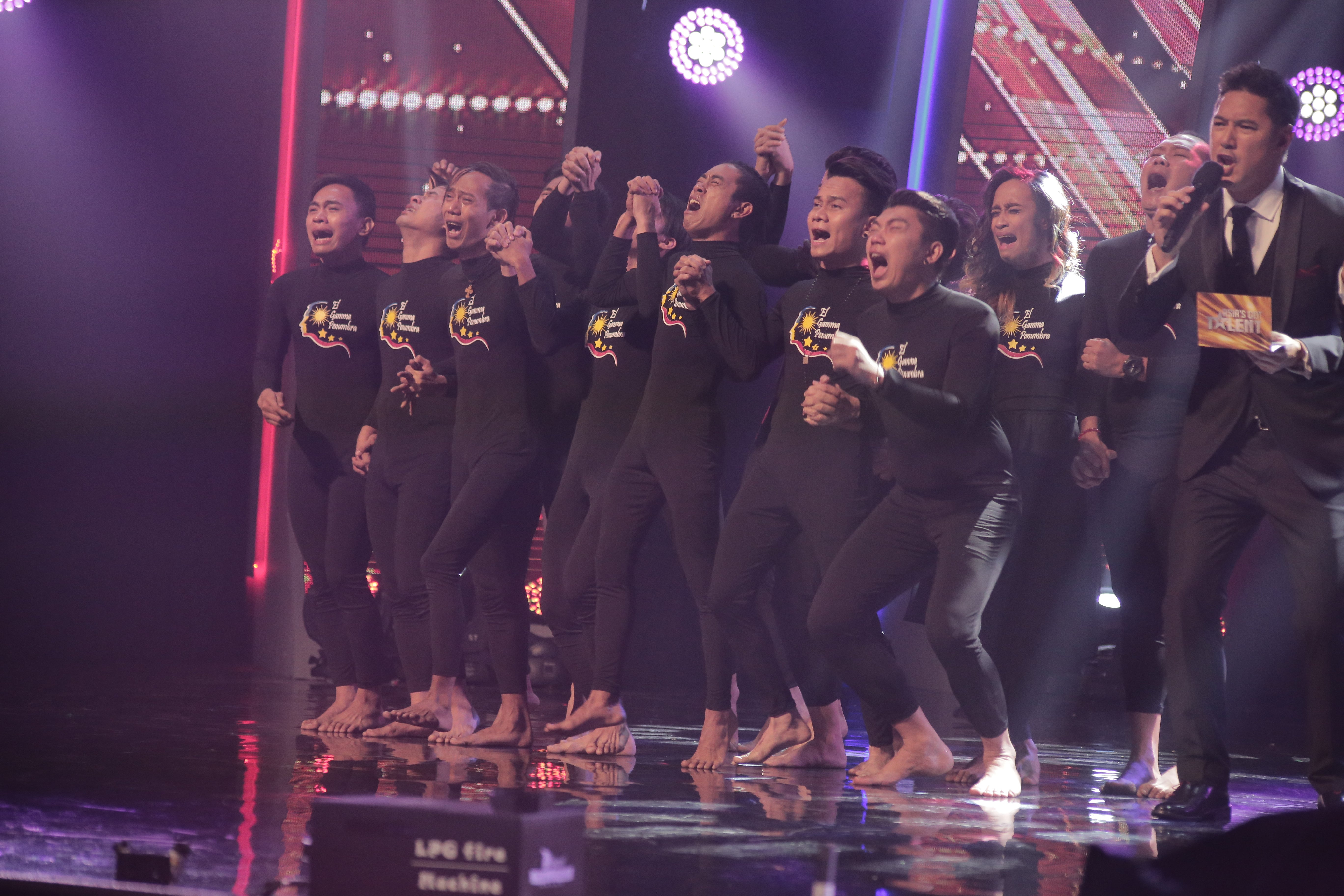 SAN PEDRO CITY, Laguna, Philippines—A hero’s welcome awaits members of the shadow play group El Gamma Penumbra, as their townmates in Tanauan, Batangas province, have remained euphoric over the group’s recent win as first grand champion of “Asia’s Got Talent,” the first in the region.

The city government of Tanauan has prepared a grand welcome for the 13-member dance troupe this morning, with the group leading a motorcade around the city. A press conference follows at the city’s gymnasium.

Members of the team, who were scheduled to arrive in Manila from Singapore late Friday, “are not only the pride of Tanauan City but of the whole Philippines,” city Mayor Antonio Halili said in a message sent through information officer Gerard Laresma.

The group’s win was leaked online, about two hours before its official announcement on the show, as the final episode was prerecorded a few hours before in Singapore. But fellow Filipinos, though elated by the recognition, were initially skeptical about the news and stayed glued to their TV screens to confirm the good news.

On Thursday evening, as the show’s grand finals aired, some 300 excited neighbors filled the gymnasium in Barangay Natatas, where three of the performers are from. The village officials prepared a free public viewing.

“It was just a bit anticlimactic because we knew ahead of the show that the group had won,” Laresma said.

He said some of the relatives who went with the group to Singapore had sent text messages to their families in the Philippines about El Gamma winning. “Yet people stayed on and cheered for them as if (they were not expecting the win),” added the information officer.

The group won $100,000, the opportunity to perform at Marina Bay Sands, and $10,000 worth of flights to various Asian destinations.

(The third placer, Gerphil Flores, was Foster’s “golden girl.” When she was eliminated in favor of the Mongolian group, Foster approached her with a reassuring hug and a short chat. The mics were turned off, but viewers who watched prior episodes were easily reminded of Foster’s promise to the 24-year-old, “The world is gonna know about you.”)

El Gamma Penumbra got the “golden buzzer” twice, and were advanced to the semifinals and the grand finals, respectively, by their act that moved the judges.

Forming themselves into shadows that morphed into figures covering subjects ranging from environmental and social issues to lighter, more carefree fare, the group shadow-shifted to songs by Vanessa Williams and other foreign pop artists. With unfailing teamwork and impressive precision, El Gamma Penumbra members became the Statue of Liberty, the Sydney Opera House, a carabao, warring soldiers, a deadly flood and Mother Nature herself, among others.

El Gamma Penumbra has a total of 19 members, although only 13 were allowed to perform because of certain limitations, according to the group’s website.

The Tanauan City natives formed the group a couple of years ago, its members dreamers and artists who merged music, dance and imagery into shadow theater performances. The friends earlier joined another edition of the talent show, “Pilipinas Got Talent,” in 2011, but landed only in fourth place.

Back home in Tanauan, the group spend part of their time visiting a home for the aged. A video uploaded on YouTube by its member Marfa two years ago showed them mingling and eating with wheelchair-bound elderly residents of the home.

Since El Gamma Penumbra joined talent competitions, the group has been donating a portion of their prize to the Sta. Ana-San Joaquin Bahay Ampunan, a home care for the elderly in Tanauan City.

With its growing number of fans (a fraction of them on Facebook, which grew from over 150,000 to 168,800 overnight) and increasing exposure, the group is bound for better opportunities to show their inimitable brand of artistry.

In a press statement, Marfa said: “We’ve been dreaming of this for a long time. It’s time to [give] back by [creating more] wonderful performances.”

On Facebook, the group posted, “You have been an unforgettable part of our ‘Asia’s Got Talent’ experience … You have voted for us and it means you are all with us in promoting goodwill to the world. This success will serve as our inspiration to strive harder.”

Fifty-seven-year-old Orlando, Mark Anthony Pabia’s father, who works as a security officer at city hall, recalled screaming out his support for his son’s team.

“He got what he had always wanted,” Orlando said in a phone interview, of his son, an interior design student, “who loved dancing and teaching choreography to younger performers.”

He said he would have wanted to accompany his son abroad but his passport was not approved in time.

AXN Philippines’ business head Gidget Policarpio-Lao said the leak about the group’s win was unfortunate, but that despite that, “we are very happy with the results, and extremely proud of El Gamma Penumbra as they carry the Filipino flag!”