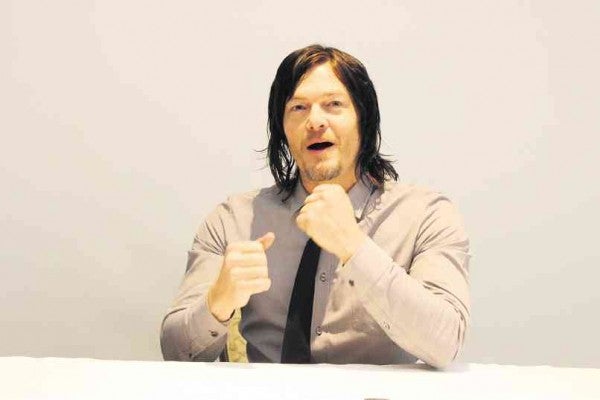 LOS ANGELES—Norman Reedus, who is Daryl Dixon in “The Walking Dead,” revealed the unusual content of some of his fan mail. The actor, beloved for his portrayal of a backwoods survivalist in the hit TV series, recited some of the wild things his followers send him in his matter-of-fact fashion.

Sporting a goatee and his character’s “wild hair,” Norman, 46, is buff. “You want to stay in shape for the show—but, on the other hand, you don’t want to show up for the next season just jacked. You want to keep it real, which is the same thing that’s going on with my hair right now. Like, get a haircut, but I want to keep it real. So, there’s that—but, the show itself keeps you in shape in a lot of ways, because its 100-plus degrees with the humidity (in Atlanta), and you’re running and carrying a 45-pound crossbow.”

Andrew Lincoln said in our interview that we should ask you about the content of your fan mail.

Oh, God. He comes in my room all the time. He spends more time in my trailer than in his own trailer. We sit there like Beavis and Butt-Head and talk about everything. He likes to go through my fan mail. I get crazy stuff—everything from breast implants to sex toys.

What do you mean—breast implants?

(Laughs) A lady sent me her breast implant. She said she read an interview, and it sounded like I was depressed. She thought I should have the breast implant. So, the implant is my phone cradle in my trailer. I also get weird sex toys.

I get Special Olympics gold medals that kids won. A lot of the fan mail is from people who have gone through chemo or dealing with breast cancer.

A lot of my fan mail is really uplifting. They write, “You helped me get through chemo.” They have (Daryl Dixon) action figures and posters up in their hospital rooms.

There are probably 20 different fan groups. There are girl groups with many members around the world, like Daryl’s Dolls, Norman’s Nymphos and Dixon’s Vixens. They should start a roller derby league or something.

For the most part, it’s very uplifting fan mail, but every once in a while, I’ll get a sex toy, photographs or just weird, crazy stuff.

Any downside to fame?

Yeah. I was recently on a plane. I ran from the set to the airport. I bought a sandwich, because I was starving. I got on the plane—I get this a lot—I sit down, and people will walk by and videotape you like this (demonstrates how passengers casually walk by with their phones, down on their sides, but they are surreptitiously videotaping him). It happens on every flight. It’s like, I know what you’re doing.

I pull out the sandwich and start eating. I turn and everyone around me is videotaping me eating the sandwich. So, I got up and ate the sandwich in the bathroom of the plane. I was like, this is weird.

Is there anything you can tell us about the arc of your character in the coming season?

I had a conversation with Scott Gimple (showrunner) about where Daryl’s going. Scott is good at talking for an hour and a half and not telling you anything at all. But, in my mind, what I think is going to happen—you can see by my hair that I’m in a wild-animal mode on the show right now. My mom is like, “Please cut your hair!”

I think it’s going to be a full-blown fight. We know that there are bad guys around us right now. Daryl knows what type of people there are. You take the people in the Terminus—they were cowardly in their evilness. But, these guys are better around us now. They’re not afraid to show you how mean and ruthless they are.

Daryl knows what type of person it takes to survive in this world. Most of them are really bad. After he sees that body on the tree and all of that, he gets a clear idea of what’s coming. That group will probably just wreak havoc on us, and we’ll end up out in the wild again.

So, you’d like Daryl to be alive at the end?

Clint Eastwood doesn’t live at the end of every one of his movies.

That’s true, but I’d like that thing like, “Whatever happened to him?” I like that kind of an ending, because I’m not in the comic book. You don’t have to kill me that way. I don’t want to wear the makeup and do the thing.

I’ve been begging Scott and Robert (Kirkman, creator) for a dog. But, they are like, “If you do that, you’ve got to have four dogs that look the same, then the dogs are going to steal all the scenes. No one will care about you, guys. They’ll just want to watch the dog.”

You could all die, but the dog will not.

How similar are you to Daryl?

I’m  like Daryl. I mean what I say, and I have a very select group of friends whom I trust and I would do anything for. I’m awkward and shy. Daryl is probably a lot tougher than me, to be honest. I’d probably hide before I’d fight.

What are your thoughts about a “Walking Dead” movie?

I would love to do a “Walking Dead” movie. I’d like to do it in winter with snow, which would suck (laughs), but it would be fun. When you do a TV show, everything’s quick. I’d like to spread that in an hour and a half and tell a full story.

What’s it like being the father of a teenage boy, Mingus?

I give him advice on situations. Like, I tell him, “You don’t have to act cool; just be you and trust what you do.” But, the thing about Mingus is, I’ve never seen him throw a tantrum in his whole life.

Does he show interest in becoming an actor, too?

We got this call because they are going to make a new “Spider-Man,” and he’s like 14 or 15. They asked, “Would Mingus want to audition for ‘Spider-Man?’” He’s had a couple of these calls, and he always said no to all of them.