Changes in Cinemalaya for filmmakers 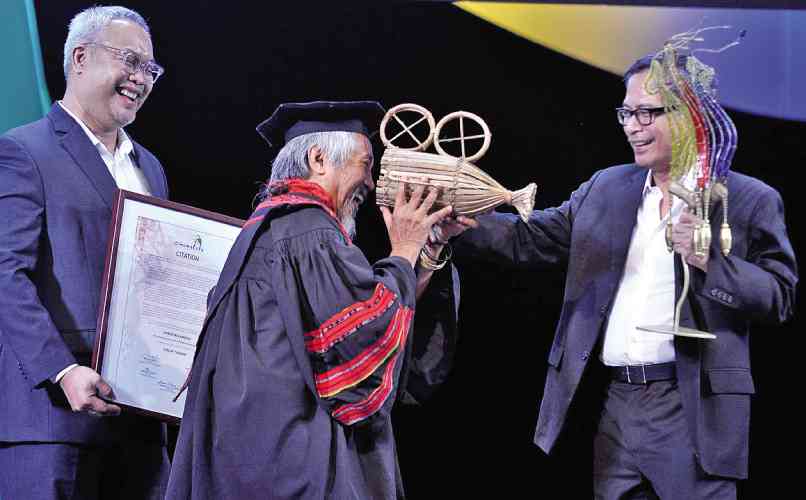 Filmmaker Kidlat Tahimik returned the Lifetime Achievement award handed to him by organizers of the Cinemalaya Philippine Independent Film Festival “to provoke a discussion” on their decision to revise the festival’s mechanics, according to a statement released by the Cultural Center of the Philippines (CCP).

The CCP, main producer of the annual indie fest, said its officers have come to know of Tahimik’s move through social media even before an article about the issue was published in the Inquirer in March.

“Officers talked to Kidlat over the phone,” the CCP said in a statement.

Tahimik, acknowledged as the father of alternative/independent Filipino filmmaking, protested the Cinemalaya’s decision to do away with the New Breed section, a program dedicated to young filmmakers. Starting August 2016, it would be merged with the Directors’ Showcase, which features works of veteran directors.

With the revision, Tahimik argued that young talents would then be forced into “the same boxing ring as the heavyweights. It’s like high school boxers being sent to tussle with Manny Pacquiao,” the director was quoted in an earlier Inquirer story.

Cinemalaya festival director Chris Millado, in a statement, explained that merging the two sections would strengthen Cinemalaya’s “resolve to support, develop and showcase the works of the burgeoning generation of filmmakers.” He added that it also recognized “the potency of the new as it engages with the established.”

Millado, who is also CCP’s artistic director, explained that “the ‘story’ and innovative ways of telling [it] continue to be the main focus of Cinemalaya films and this is where the new breed derives its power.”

He pointed out that “the merging of the two sections allows Cinemalaya to schedule more screenings of films, therefore, giving them more exposure and an increased cash subsidy for film production.”

Millado believed that the process of monitoring, guidance and mentorship, “which Cinemalaya has provided to new filmmakers, has contributed to the success of many and we have broadened this opportunity by establishing the Cinemalaya Institute.”

Tahimik said he was not “downgrading the achievements of Cinemalaya” and that he appreciated its efforts to promote the arts. “However, the money mentality seems to [indicate] that it’s more efficient to put together the little leaguers with the big boys.”

Millado said that the “environment for filmmaking has changed since Kidlat became one of its pioneers three decades ago. These conditions prompted Cinemalaya to review and realign its strategy while keeping its original vision.”

He said Cinemalaya officials plan to meet with Tahimik “so that he may understand and appreciate the strategy of Cinemalaya for the next 10 years and assure him that we are one with the vision of developing new and independent films in the Philippines.”

Millado announced that 150 short film features and 120 full-length feature proposals have been submitted to Cinemalaya for consideration for its 2015 and 2016 editions.

The revisions came at the same time as changes in the fest’s leadership.

Chionglo explained the decision to screen only short films this year. “This is because we have very little time to prepare for the festival this August,” he told the Inquirer .

The 2015 festival will be held solely at the CCP in Pasay City, said Chionglo. For the past four years, screenings were also held at Ayala Malls in Makati and Quezon City.

Chionglo also elaborated on the move to merge the two sections. “The idea is that, by this time, most young directors have improved … and are no longer considered newbies.”

The 2015 edition will feature new sections, including “10 Years of Asian Films,” which will showcase films recommended by the Network for the Promotions of Asian Cinema or Netpac. Another section will have selected Cinemalaya films produced in the past 10 years. “It will be a retrospective,” said Chionglo.

A section called the “Philippine Film Premieres,” would showcase movies—made by Filipinos and about Filipinos—that have never been screened locally.

The Cinemalaya Film Institute, headed by filmmaker Carlos Siguion Reyna, was launched this month. The school would teach writers, directors and producers all about film creation, Chionglo related.

For its first year, the Cinemalaya Institute will commission three professors from the New York University Tisch School of the Arts. It is in cooperation with the Film Department of the College of St. Benile, “which permitted the use of its equipment,” said Chionglo.