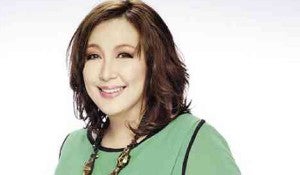 The clarification came straight from Megastar Sharon Cuneta herself.

The singer-actress has denied reports that she will be co-hosting the new show that will replace the celebrity gossip talk show “The Buzz” with Boy Abunda on ABS-CBN.

After 15 years on the air, “The Buzz” took its final bow in April.

Cuneta took to Facebook to clarify the issue. “There’s some news going around that I am going to be in a show with Kuya Boy Abunda to replace the ‘The Buzz.’ That would be so great—only, it isn’t true.”

She recalled that she had been interviewed about the rumor by a TV crew during her aunt Helen Gamboa’s birth anniversary party last Thursday. “And then it came out in a major paper the other day lang.”

The Megastar related on Facebook: “No one has brought it up with me or my manager Sandra Chavez, and I also asked Kuya Boy about it the day the write-up came out, and no one’s talked about it with him either.”

She said she still had no idea what would come after her current show, “Your Face Sounds Familiar,” which will end soon.

“My contract with ABS-CBN so far is only for the show,” she said.

Cuneta said she had to stop dieting for a while as she had been sickly of late. “I wish I was as thin as Sarah (Geronimo) or Kim (Chiu) or Maja (Salvador) or Bea (Alonzo), but truth is, I’m a mom now and no longer in my 20s so the weight isn’t gonna just fall off as quickly as it used to!”

She asserted: “I’m just me. And it would be so sad if I had to apologize for being the ‘me’ that I am now, especially because of the ‘me’ I was for way too long.”

She vowed: “I will keep doing what I can, as long as I can, as far as I can take it. But no more than that. Besides, at this point, I think my loyalists love me for who I am and what I’ve achieved and given, and yes, to a certain point what I look like, but not just all that na.”

And going back to the matter at hand: “So there you go. Sayang (It’s a pity) but not true about the show with Boy Abunda. Hope this settles it.”

Cuneta officially returned to the Kapamilya network, her home for 23 years, when she signed an exclusive contract in March. With a report from Yuji Gonzales, INQUIRER.net/TVJ

Read Next
Singer misses court date for baggage carousel joy ride
EDITORS' PICK
The Best Tech Gifts For The 2022 Holidays
Is it safe to talk politics again at family gatherings? ‘The Reconciliation Dinner’ shows us what that’s like
EDITORIAL: To a bike-friendly future
House energy committee chair Arroyo bats for cheap electricity
vivo’s coming to town to grant wishes with more holiday promos
Pagasa: Warm, sunny Sunday in most parts of PH
MOST READ
LOOK: Vhong Navarro transferred to BJMP detention facility in Taguig
The Elephant Man in the Senate
Posh village as ‘shabu’ haven
LOOK: Zanjoe Marudo bonds with Ria Atayde, her family
Don't miss out on the latest news and information.