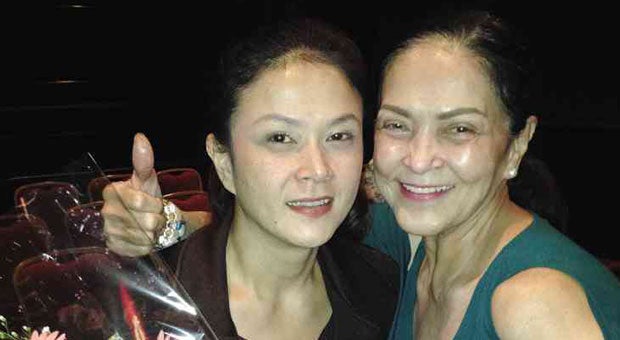 “I’m ready for the director to yell ‘pack up,’” award-winning actress Gina Pareño quipped casually after watching daughter Racquel Pareño’s performance in the play “Der Kaufmann” at the Cultural Center of the Philippines (CCP) two years ago.

“Pack up” is a show biz term for “calling it a day (or night),” a euphemism for retiring or kicking the bucket as well.

“Let’s face it, I only have a few years left in this business,” Gina, 64, candidly tells the Inquirer in a recent interview. “I am just happy that Racquel is continuing my love for acting.”

If you ask Racquel, however, she is not ready to let her mom retire anytime soon.

“No, I need her around, to guide me,” Racquel, 37, insists. “She inspires me. She pushes me to give my best. I cannot afford to be a bad actor since my mother has won awards here and abroad.”

To her credit, Racquel brought home her own trophy last year, as best featured actress in a play for “Der Kaufmann” at the Philstage Gawad Buhay.

Gina made it a point to attend the awards night. “I asked to be excused early from taping and drove all the way from Antipolo. I was nervous throughout the drive.”

When her daughter won, she was speechless, for a change. “I just found myself smiling…I am so proud of her.”

Last year, mother and daughter tackled the same role, the martyr wife in “Pahimakas sa Isang Ahente,” an adaptation of Arthur Miller’s “Death of a Salesman,” also at the CCP. For this play, they both got cited by Philstage Gawad Buhay, Racquel says.

Although they may end up vying for the same award, there is no competition in the Pareño household.

“I am already content with my accomplishments as an actress…I leave all these awards to my daughter,” Gina says.

Racquel surprised Gina with her show biz comeback. Racquel tried the movies as a teener in the 1990s, but soon gave up because she was “painfully shy.”

“I didn’t tell her that I tried out for the Actors’ Company of Tanghalang Pilipino until I got in,” Racquel recounts. Nanding Josef, her mom’s “Kubrador” costar, was her teacher.

“At first, I was worried because she was a late bloomer,” Gina admits. After all, in a youth-obsessed industry, restarting a career in your late 30s is unheard of.

“But when I saw her onstage, I realized that acting was really in her blood,” the proud mom says. “She won her first award after only a year in the business. I had to wait for decades. I had to survive drug addiction before people took me seriously!”

“My mom and I don’t discuss my work, but she is honest with me,” Racquel says. “I am sure that she would tell me if I were lousy.”

“Even though we live in the same house, Racquel refused rehearsing together when we were doing ‘Pahimakas,’” Gina recalls.

“I avoided throwing lines with my mom because I didn’t want to end up copying her performance,” Racquel explains.

They already look alike, they shouldn’t act the same way, too, Racquel relates.

In any case, their physical resemblance was put to good use in past projects. Racquel played the younger versions of Gina’s characters in TV shows like “Lorenzo’s Time” and “Magpakailanman.” Racquel also played Gina’s daughter in an episode of “Maalaala Mo Kaya.”

Racquel is now a fixture on the CCP stage. Gina, who is a regular in the GMA 7 series “Let the Love Begin,” considers “Mother Courage” a dream role onstage.

The Pareños will be seen in one movie soon, in Jeffrey Jeturian and Ellen Ongkeko-Marfil’s historical epic, “Lakambini (Woman Leader).” Gina will play the older Oryang (played by Lovi Poe as a younger woman), wife of revolutionary hero Andres Bonifacio. Racquel will portray one of Oryang’s sisters-in-law.

It will be Gina’s reunion with Jeturian who directed her much-acclaimed performance in “Kubrador,” which won for her best actress in Belgium, India and France in 2006.

“I want Racquel to experience making indie films, too,” Gina says. “There is an offer for Racquel to work with Lav Diaz.”

Gina is eyeing Racquel to play her younger self in a planned biopic.

“I will produce it myself,” Gina says. “I know she can do it. She looks like me. She even has the same bra size when I was that age!”

Gina is certain only Racquel can tell her story truthfully and poignantly. “I didn’t hide anything from her. She knows everything I went through.”

“I was a lot like Shayne when I was her age. I also didn’t want to join show biz. I know that kind of acting so well,” Gina says.

The next chapter begins.

Read Next
UST alumnus codirects Cannes-bound Pixar film
EDITORS' PICK
High inflation: Your P1 is now worth only 87 centavos
UK’s Boris Johnson will resign, BBC reports
High-risk pregnancy: Reducing your risk is in your hands
Geek out at TOYCON 2022 powered by Smart Signature
House energy committee chair Arroyo bats for cheap electricity
Unemployment rate up to 6% in May
MOST READ
Suspect in grisly killing of missing woman in Bulacan arrested
Kim Atienza’s daughter flaunts bikini body in response to critics of her ‘revealing photos’
Japanese artist who created ‘Yu-Gi-Oh!’ found dead in the sea
FDA probes popular Filipino noodle brand for ‘high level of ethylene oxide’
Don't miss out on the latest news and information.