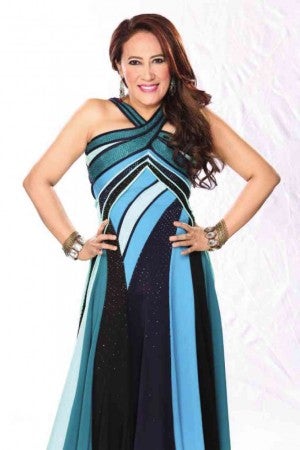 Now that Ai-Ai de las Alas has moved from ABS-CBN to GMA 7, some viewers are curious about how her first project for her new studio, the teleserye, “Let the Love Begin,” will shape up. Well, we caught the new show’s first telecast, and can thus share these initial impressions:

First, it’s bracingly clear that the series intends to be more eventful than the usual teleserye. Unlike many other shows that start their storytelling way back in the past, sometimes even for entire generations, “Let the Love Begin” starts in the here and now, with Ai-Ai playing a radio announcer who cohosts a popular show with a widower portrayed by Gardo Versoza.

They’ve been BFFs since way back, but we suspect that they will eventually be drawn together romantically, especially because it’s quickly established that her husband (Joko Diaz) is a womanizing loser.

In the first telecast, however, that possibility was kept in temporary abeyance, and much of the screen time was taken up by scenes involving their respective male (hers) and female (his) children’s “hate-hate” relationship—which we presume will also become more lovey-dovey when they become teenagers.

At the end of the premiere telecast, a teaser hinted that Ai-Ai’s husband’s rashly violent act would force her to leave their domicile—and temporarily move in with Gardo.

Another teaser even more titillatingly intimates that, in an unguarded moment, “something” happens that will compel them to confront their real feelings for one another. Well, we told you that the show’s first telecast was eventful, didn’t we?

Initially, the show’s mature leads work hard to create good, feisty “chemistry” onscreen. In addition, Ai-Ai can be seen trying to enunciate and speak more clearly, a flaw for which we’ve rapped her in the past. Well, good for her, and she should continue to clean up her act.

On point of dramatic-comedic performance, however, Versoza gets the best mark because he can shift from one to the other seamlessly. On Ai-Ai’s part, the effort sometimes shows. But, she still gets props from us for at least trying to expand her range.

Other notes: Gina Pareño plays Ai-Ai’s opinionated mother in a manner that’s too floridly fussy and attention-calling for the supporting role’s purposes. And the series’ two child leads, sad to say, bring to their (temporary) roles not much more than “obedient” proficiency.

On the whole, however, the new show gets plus points for its brisk storytelling and engaging lead characters. We hope, however, that the series will continue to show them entertainingly and chattily at work as radio announcers, and not just fully concentrate on their private lives.

As for Ai-Ai’s louse and lout of a heavy hubby, what will happen to him? At the end of the first telecast, we thought that he was going to languish in jail for starting a loud and livid street fight—but, he was later shown hurling a grenade(!) at their residence. What gives?

How did he go scot-free so fast? And, with him unexpectedly and inexplicably popping up now and then, how can the leads’ incipient romance bloom and peak, as it should?