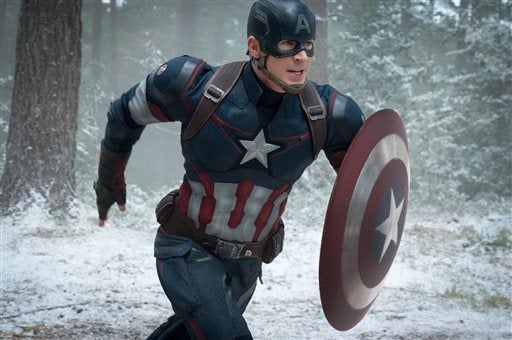 This photo provided by Disney/Marvel shows, Chris Evans as Captain America/Steve Rogers, in the new film, “Avengers: Age Of Ultron.” The movie releases in U.S. theaters on May 1, 2015. AP

NEW YORK — “Avengers: Age of Ultron” debuted with a Hulk-sized $27.6 million in Thursday night showings, well above the pace of the first “Avengers” film.

Disney said Friday that the opening night haul of “Age of Ultron” easily surpassed the $18.7 million first night opening of “The Avengers” in 2012. That Marvel release went on to become the third highest grossing film of all time with $1.5 billion worldwide.

“Age of Ultron” appears poised to challenge that total. It has already made $287.3 million internationally. This weekend, box office forecasts predict “Age of Ultron” to make more than $200 million in North America and possibly surpass the all-time weekend record set by “The Avengers” with $207.4 million.

Avengers: Age of Ultron shatters records with P339.83-M in 5 days