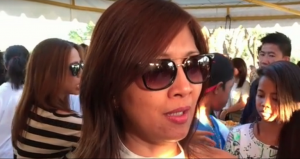 THE mother of the late YouTube star Jam Sebastian has accused Mich Liggayu of keeping her son’s share of the funds earned by the pair from revenues gained from the couple’s YouTube channel.

In an exclusive interview with Startalk on Saturday, Maricar Sebastian aired her grievances against Mich Liggayu.

“I said, ‘I want a breakdown of finances of my son.’ I am not a stage mother and I did not even get a single cent from him because we have our own lives. This time, since my son died, I now have the right (to his share),” Sebastian said.

Maricar said at first, she declined to speak up against Liggayu, but the treatment she has been receiving from the other half of the YouTube sensation Jamich prompted her to break her silence.

“I wish I did not have to speak up but it’s just too much. We were asking for his belongings. But you told us that you will think about it. We were asking for his share but you did not give us any. You want everything for yourself. My son also worked hard for it. Jamich will not exist without Jam. And until now, you are benefiting from it,” she said.

She also accused Liggayu of cutting off her son from their social media accounts and e-mail from which they earned money.

Jam’s mother was also angered when she found out that some of his son’s belongings were missing from their condominium unit. Before he died, Jam and Mich have been living together.

“When my son died, his cellphone was with us. You borrowed it from Yexel (Jam’s brother) and what did you do? You logged him out of his Facebook, email and the Jamich page. Why? So that we cannot have access to it? Because you know that you are earning from the Jamich page.”

Aside from speaking about Liggayu’s alleged greed, Sebastian also insinuated that her son’s girlfriend has been seeing someone when Jam was fighting for his life.

“Every time you stay out late, where do you go? You are not sleeping in the house. You told us that you are just friends with him but why are you spending more time with him? Where were you when Jam needed you the most?” Sebastian said.

Liggayu has been linked to singer Neo Domingo but the latter publicly denied the rumors. AJH/AC