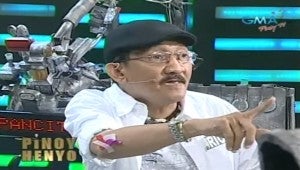 Comedian Ritchie d’Horsie passed away on Friday evening. He was 58 years old.

His niece April Alcober told INQUIRER.net that he died at around 9:24 p.m. on Friday in his residence.

Alcober said the comedian, whose real name is Ricardo Reyes, was diabetic and had been having a hard time breathing during the past several days.

She said they attribute the death to multiple organ failure.

His last dialysis session was extremely difficult for him, Alcober said.

Orteza said the actor had been “in and out of the hospital.” She said the last time they saw each other, he was already on a wheelchair, waiting for Vic Sotto at the studio of Eat Bulaga.

Reyes was among the cast of popular comedy show “Iskul Bukol.” He also starred in several films.

Ortezo, who was his co-star in “Iskul Bukol,” said Reyes was a “gatungero” who enjoyed “stoking up fires for fun.”

His wake will be held at Loyola Marikina. KS/With a report from Bayani San Diego