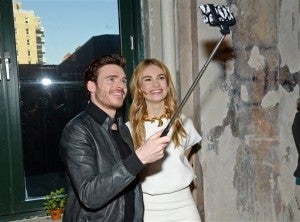 In this March 9, 2015 file photo, actors Richard Madden and Lily James take a selfie while attending AOL’s BUILD Speaker Series to discuss their new film “Cinderella” at AOL Studios in New York City. Museums in the U.S. and Europe, including the Palace of Versailles outside Paris and Britain’s National Gallery in London, have banned selfies. AP

It won’t feature a lot of selfies, if organizers have their way.

While stars including Charlize Theron, Natalie Portman, Rachel Weisz and Benicio del Toro will be welcomed on the red carpet at the French Riviera extravaganza, selfies and selfie sticks most definitely won’t.

“We’re not going to ban selfies. We don’t have police powers,” Fremaux said. But he strongly urged festivalgoers to keep the red carpet a selfie-free zone.

Fremaux announced 17 films that will be competing for prizes at the May 13-24 festival, chosen from more than 1,800 submissions. They include Jia’s “Mountains May Depart,” Sorrentino’s “Youth” — a film about age starring Michael Caine — and Van Sant’s forest feature “The Sea of Trees,” starring Matthew McConaughey. 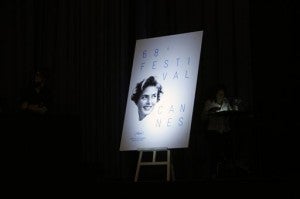 sibling saga “Our Little Sister”; and France’s Audiard with “Dheepan,” the story of a Tamil refugee in France.

Cannes organizers have faced criticism for not selecting more films by female directors. For the first time in more than 25 years, this year’s festival will be opened by a film by a woman, French director Emmanuelle Bercot’s drama “La Tete Haute.”

Two more female filmmakers are in competition: Valerie Donzelli with “Marguerite and Julien” and Maiwenn with “Mon Roi” (“My King”). Both directors are French.

Genres range from drama to martial-arts thriller to science fiction rom-com — in the form of “The Lobster,” a film by Greek director Yorgos Lanthimos starring Weisz and Colin Farrell that Fremaux called incomprehensible, in a good way. 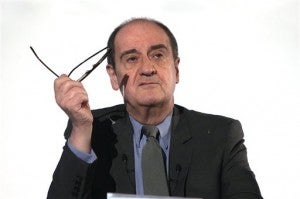 Fremaux said several more films will be added to the competition before the festival opens.

Pixar, whose buoyant “Up” opened the festival in 2009, returns with “Inside Out,” in which an adolescent girl’s thoughts and emotions become animated characters.

Actress Portman makes her feature-film directorial debut with “A Tale of Love and Darkness,” based on a memoir by Israeli writer Amos Oz.

Winners of the Palme d’Or and other prizes will be chosen by a jury led by directors Joel and Ethan Coen. TVJ

Ready for Cannes and beyond