Paul Soriano: For viewers, ‘Kulafu’ will be like watching a miracle | Inquirer Entertainment
Close
menu
search

Paul Soriano: For viewers, ‘Kulafu’ will be like watching a miracle

BUBOY Villar plays an aspiring boxer who won every battle in his young life.

I was deeply moved by the 2011 film “Thelma,” directed by Paul Soriano and inspired by the true story of a struggling track-and-field runner.

Paul is at it again with his latest film, “Kid Kulafu,” the childhood story of Manny Pacquiao, opening in theaters today. Kid Kulafu was not into kid stuff; he was one tough kid.

Here’s my one-on-one with Paul:

What surprised you most about Pacquiao’s life story?

It was very dramatic and cinematic. His story has all the elements of a great and inspiring film. He literally fought many odds throughout his life. The fact that he won all those battles… makes this a story that needed to be told.

And he actually fought his biggest battle before he stepped into a boxing ring. This is what you will see in “Kid Kulafu.” He had to conquer himself before he conquered the world.

One that was really powerful was when Manny talked about his relationship with his mother, Mommy Dionisia. He got very emotional and cried. The love he has for his mother is pure and unconditional. I’m extremely grateful and blessed that Manny opened up to me for this film. He told me everything about his tough childhood. Recalling those days wasn’t easy for him, but he knew that people could draw inspiration from it. I will forever be grateful to Manny and his family.

Why is “Kid Kulafu” a must-see?

This film is the inspiring true story of a young boy named Emmanuel, who had nothing except a dream, a dream he fought every day to make come true. Then one day it did come true and changed his life and the world… I pray that, after watching this film, people will be inspired to work hard and make their own dreams come true. “Kid Kulafu” is like watching a miracle happen before your very eyes.

Tell us about your wedding preparations.

We have yet to sit down and seriously plan the wedding. Both our schedules have been very hectic, but we do plan to do this in the next few weeks.

Where will the honeymoon be?

Anywhere, really. What’s important is that we will get to experience traveling together alone for the very first time.

How many kids do you and Toni plan to have?

As many as God blesses us with.

Will you set limitations on Toni when she becomes your wife?

I will not stop her from doing what she loves to do. She worked very hard to get to where she is today, and I will continue to support her and her dreams.

How do you resolve arguments?

We talk. What’s important to us is that we communicate so that we can solve any problem.

Tell us something that people don’t know about Toni.

She’s even more lovable behind the camera.

What’s the craziest thing that you and Toni have done?

Nothing yet. We look forward to traveling around the world once we get married.

How do you handle Toni’s bashers?

We choose to ignore all the hate.

What is your favorite movie of all time?

Steven Spielberg’s “E.T.” It really stretched my imagination. I watch it to this day.

If you could change one thing about the local movie scene, what would it be?

I hope independent films will be given the chance to be shown in several commercial theaters for at least a week without the threat of being pulled out. How can we create an audience for independent cinema if we don’t have the opportunity to show it to everyone?

If your life were made into a movie, what would the title be? 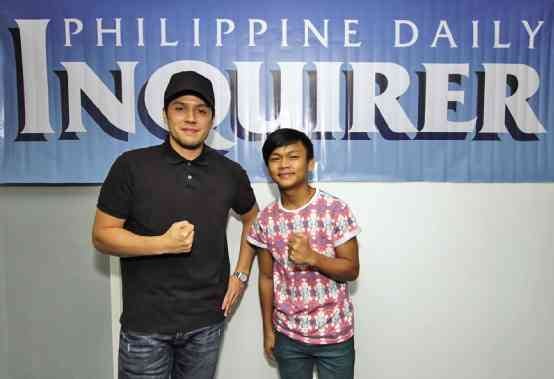 What is the significance of “Kid Kulafu” to Filipinos?

That there is absolutely no excuse for you not to chase your dreams and make them happen. I hope that everyone will watch this film. Manny Pacquiao has always fought for the country and given pride to Filipinos. It’s time for us to show the same unwavering support.

Fans all over the world are eagerly awaiting the Manny Pacquiao-Floyd Mayweather boxing match. Pinoys will surely be glued to their TV sets. Cignal TV makes it available via pay-per-view, live as it happens in Las Vegas, with a special rate of P2,000 until April 18. Afterward, the regular rate of P2,500 will apply.

Insiders find it remarkable that even though Baek is already in her mid-30s, she still continues to reign in an industry dominated by teen bands.

Hail to the K-pop Queen!