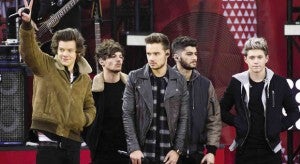 In an exclusive interview with UK newspaper The Sun released on Saturday, the now four-piece boy band remained optimistic about the group’s future.

“It’s been a tough few weeks, probably the toughest since the band was formed five years ago,” Payne was quoted in the report.

“We’re gutted that Zayn chose to leave, but now after a few performances as a four piece, we’re feeling confident and are determined to carry on stronger than ever,” he added.

Tomlinson said the remaining four members were “100 percent committed” to the band.

In the interview, Styles said they were excited in making the band’s new album sans Malik.

“It’s very exciting to be working on our fifth album. It shows how incredible the fans have been. A huge thank you to them for everything they’ve done for us. All the love to them,” Styles said.

One Direction officially announced Malik’s departure last March 25 to live as “a normal 22-year-old who is able to relax and have some private time out of the spotlight.”

They performed without Malik for a two-day concert in Manila last March 21 and 22.

However, a week after, music producer Naughty Boy released a two-minute snippet of Malik’s demo for his first solo single “I Won’t Mind.” AJH