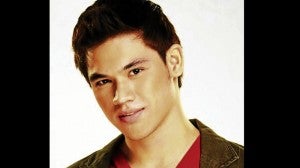 The “sleeper” hit, “Zombadings,” is a triumph for its creators (Jade Castro, Michiko Yamamoto, etc.), as well as a “breakthrough” stellar vehicle for its young male lead, Mart Escudero. “Going gay” is always a risky proposition in these parts, but Mart’s calculated gamble has paid off for him – bigtime.

From starlet obscurity, it has propelled him to the top of the “new young star” parade. It’s clear from his portrayal that he swishes only for the screen, so his prospects as a male romantic lead have not at all been affected by his “delicious” performance.

What makes the actor’s gay portrayal so thoroughly winning is his wise decision not to camp it up excessively to get cheap laughs, but to play his character more for his innocence and, ah, “surprised cluelessness.” He doesn’t know for sure that he’s turning gay, so when it hits him, he’s caught completely off-guard.

It is this “bewitched, bothered and bewildered” tone that makes his gay characterization so accessible and “forgivable,” even for straight and macho viewers.

The fey and non-slapstick approach is difficult to play and sustain, but Mart is able to pull it off. That’s what makes him so promising and exceptional in a field swamped by scores of telegenic, buff but insensitive and hollow hunks.

Now that he’s starting his stellar career, Mart and his handlers should plot his next move with even greater care. It simply won’t do for him to follow up on “Zombadings” with a “smorgasbord” TV or film starrer in which he has to share the screen with a half-dozen other young talents, as is the season’s current programming gambit. He’s better advised to wait for another unique solo showcase, where his attractive “innocence” can again hold sway but, by way of a straight role.

Like Mart, Christopher astutely decided to focus on his “Everyman” character’s innocence or even cluelessness – with similarly endearing results. Christopher played the quintessential probinsyano youth who eventually “stumbled on” what it meant to be Filipino – but, he arrived at that profound epiphany with a fetching sense of “inadvertence” that made his transformation sweetly instructive and affecting.