Maki Pulido takes the good (news) with the bad

Some broadcast journalists err on the side of caution, because they don’t want to risk jeopardizing their careers with bold opinionating – so, they’re content reading the news from teleprompters and idiot boards. But, those who are truly worth their salt put their money where their mouths are – like Maki Pulido.

A recent segment of “Reporter’s Notebook” had its plucky co-host tackling the issue of sex trafficking of Filipino women in the Middle East. Then, in the magazine show’s award-winning “Backdoor” episode, Maki went to Tawi-Tawi to pursue the story of a boatman who quietly (and illegally) sneaks impoverished Pinoys into Malaysia via Sabah at night, after braving the rough waters of the Sulu Sea. The risks for her and her subjects are as high as the issues she dissects are contentious.

Straight to the point

Maki, who also co-anchors “Balita Pilipinas Ngayon” with Mark Salazar, doesn’t mince words, but her candor doesn’t come off as arrogance – she goes straight to the point and doesn’t use pa-impress, highfalutin words. 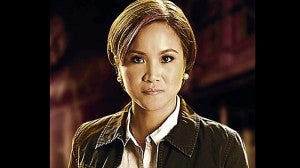 PULIDO. Puts her money where her mouth is.

What she finds challenging about her job, Maki shares, is how to present her features in a way that would spur viewers to form an opinion. She explains, “It’s a complex balancing act: You do away with sensationalizing, but at the same time, how will televiewers appreciate what’s at stake if your execution of the story lacks bite? They have to understand what the issue is about.

“As a reporter, if you don’t get the information you need in five questions, give it up. The presence of a camera makes a reporter’s job more difficult – especially when you’re interviewing children, who are basically shy. It’s faster with politicians, because they have a stock answer for everything, and they like getting interviewed.”

There’s an element of danger in some of the stories Maki covers, especially those that involve powerful and influential people. What happens when she offends them? “I don’t really get death threats, although naputulan na ako ng car brakes minsan. Pero, pinaparating ng ilang politicians sa akin ’pag napipikon sila! And, there’s a general na pinagdasal ko na sana, huwag maging AFP chief of staff (laughs), especially when my story on extra-judicial killings came out.

“One incident that really unnerved me was when I did a feature on an NPA amazon: After the interview, a farmer warned us about approaching soldiers. Natakot ako dun dahil mahirap maipit sa crossfire!”