Which way will One Direction go after Malik’s departure? 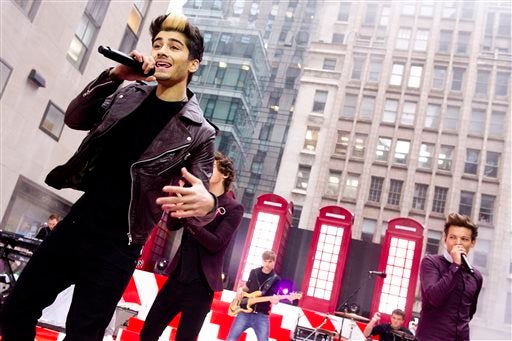 Malik said Wednesday he is leaving the chart-topping British boy band “to be a normal 22-year-old who is able to relax and have some private time out of the spotlight.”

His name immediately became a top trending topic online — #AlwaysInOurHeartsZaynMalik — as the band announced it would continue its world tour, “On the Road Again,” without Malik. Plans also remained in place for the now-foursome to record an album later this year.

“For kids now, it’s truly the equivalent of if  one  of the Beatles would have left at the height of their success,” said Rolling Stone Senior Writer Brian Hiatt of Malik’s departure.

One  middle-school teacher said the day was among the toughest in her career as tween girls ran out of class in tears.

But while it may be sad news for Malik’s fans, his departure isn’t necessarily bad for the band — at least not immediately. The remaining four members have concert dates scheduled through October and they promise a future for the group.

Unlike Van Halen, which started over when it replaced Roth with a new lead singer (Sammy Hagar); or Oasis, which essentially disbanded when Gallagher left,  One  Direction  is all vocalists, making it easier to absorb a loss.

The band’s only choice now is to continue with four, Hiatt said: “I can’t imagine, under any circumstances, them replacing him.”

One  Direction  formed in 2010 after five teenagers — Harry Styles, Liam Payne, Niall Horan, Louis Tomlinson and Malik — auditioned individually for the British TV talent show “The X Factor.” Simon Cowell had the idea of putting them together as a boy band.

They didn’t win the competition, but they went  on  to score hits and win young hearts around the world with their perky pop and cheeky personalities. Each member has his own following, with Styles and Malik arguably the most popular.

Cowell said in a statement Wednesday that  One  Direction  fans “can rest assured that Niall, Liam, Harry and Louis are hugely excited about the future of the band.”

Another British boy band faced a similar challenge in the 1990s, with unsettled results. Take That started as a singing, dancing group of five. When  one  of its members left, the band finished its world tour, released a single, then broke up. It reunited as a foursome almost a decade later and found new success. The fifth member briefly returned, then left again, followed by another member’s departure. The group now records and tours as a trio and just released a single this month.

It’s too soon to say which way  One  Direction, or Malik, might go, but making a clean split was a good first step, writes Jason Lipshutz, an associate editor at Billboard.

“Zayn’s exit from  One  Direction  is painful because it means something has ended, but it would have been vastly more painful to approach the next few months with a sense of unsteadiness,” he says. “Now, Zayn is gone, and  One  Direction  can move  on.”