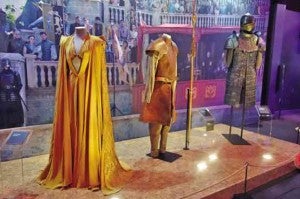 Intricacies of these outfits are often lost on viewers. Guests at the exhibit get to touch them.

LONDON—Entering “Game of Thrones: The Exhibition,” which displays over 70 props and houses several interactive installations, may be the closest that a fan of the hit TV series could get to immersing himself in the mythical, often bloody, world of Westeros.

HBO Asia invited Southeast Asia’s media outfits, including the Inquirer, in February to the first leg of the touring exhibit held at The O2 Arena. The exhibit rolls on to Stockholm this month, and is set to make stops in Madrid, Amsterdam, Tel Aviv, Berlin and Paris.

Instant eye-catchers are the intricately crafted costumes, whose finer details are invariably lost on televiewers—the craggy stitching on Arya Stark’s vest, the frippery of Daenerys Targaryen’s gown, the embroidery on Cersei Lannister’s robe, even the scratches on Gregor Clegane’s armor.

Also on display are Sansa Stark’s dress when she assumed the identity of Alayne Stone, the reptilian armor that Oberyn Martell wore in a theatrical battle against Gregor; Joffrey 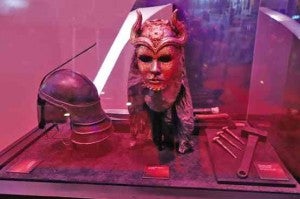 The weapons look magnificent, if fearsome: Eddard Stark’s Valyrian steel greatsword, Ice; Arya’s slender sword, Needle; Oberyn’s spear; Jon Snow’s Valyrian sword, Longclaw; and the crossbow Tyrion used in murdering his father, Tywin Lannister. And for a hint of what to expect in the fifth season, never-before-seen Dornish pieces—a whip, a pair of Kris-like double daggers and a viper box.

Myriad trinkets and artifacts fascinate—Joffrey’s and Margaery’s crowns, Sansa’s poison-filled necklace, Jaime’s golden hand, the pin of the Hand of the King, a vial of Nightshade Essence, the Wildlings’ climbing gear and, of course, Daenerys’ dragon eggs. 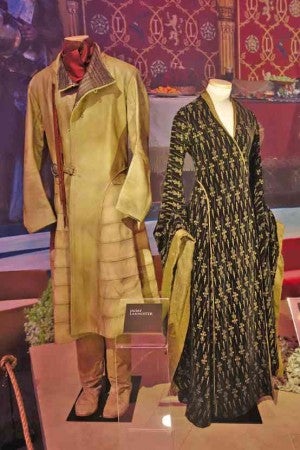 Photo walls feature memorable moments from last season. (“Game of Thrones” is based on George R. R. Martin’s fantasy-adventure novel series “A Song of Ice and Fire.”) It’s hard to miss a replica of the dragon Rhaegal and a full-size model of a White Walker.

While still outside the venue, guests are asked to pick among the Houses (we went with the Lannisters) and then register an online account to be used as a repository for digital treats.

A green-screen booth churns out videos of fans being roasted by a dragon. Next to it is a photo cubicle that transforms one’s face to that of a White Walker’s. The most engaging is “Ascend the Wall,” which puts one in the shoes of a Night’s Watch crow.

With the Oculus Rift-powered 4D headset on, one is transported to the winch, a wobbly lift that connects Castle Black to the top of The Wall—a 700-feet high and 300-mile fortification that prevents Wildlings and unknown menacing forces from barging into Westeros.

At the end of the exhibit, under the spotlights, is the one thing that protagonists in the TV show are killing each other over: The Iron Throne. For a few minutes, fans are allowed to sit on it.

The battle for that throne of a thousand swords continues in the fifth season of “Game of Thrones,” which premieres April 13 on HBO Asia. 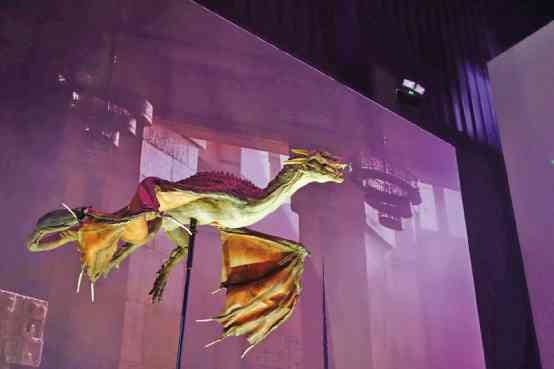 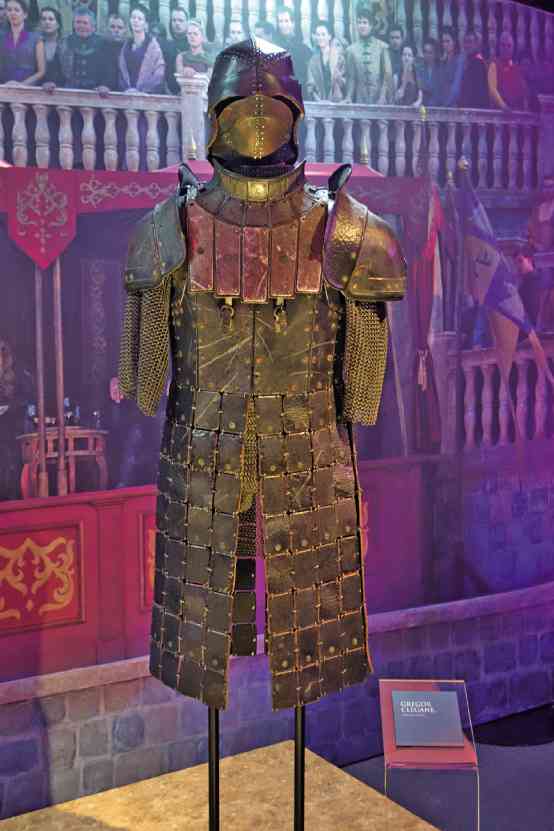 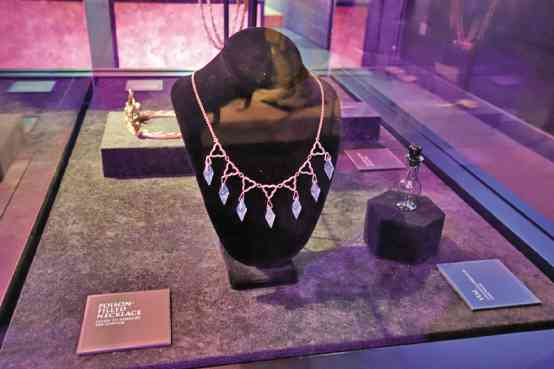 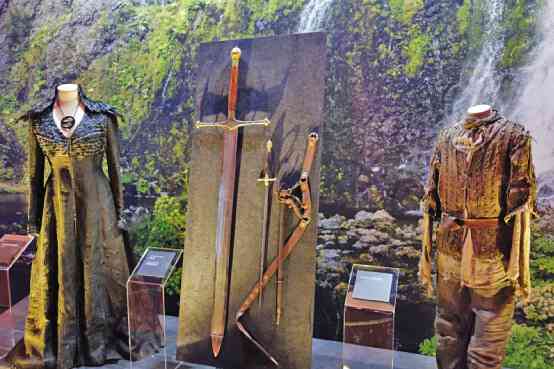 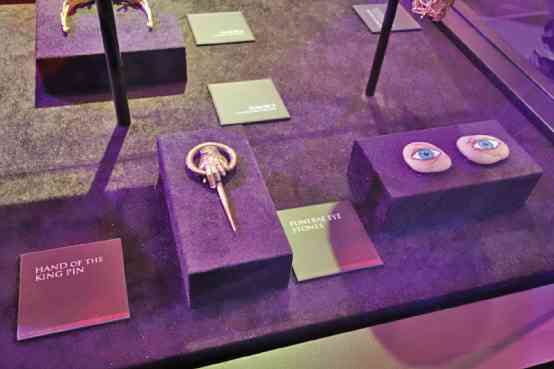 Pin worn by the Hand of the King 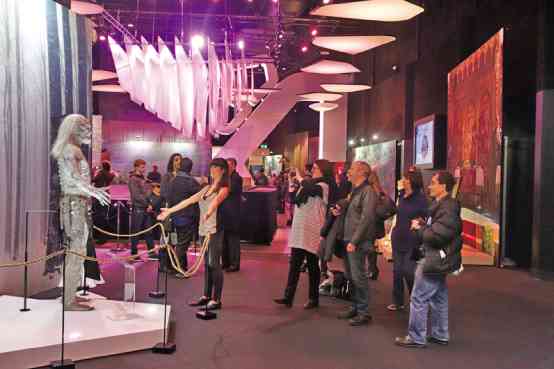 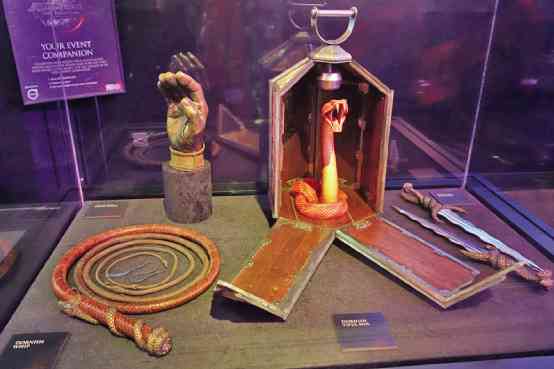 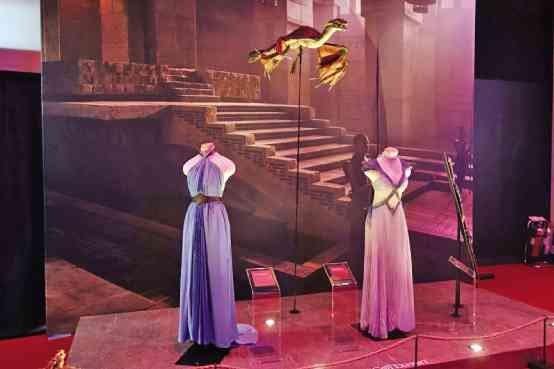