One Direction, minus one, takes Manila by storm | Inquirer Entertainment
Close
menu
search

One Direction, minus one, takes Manila by storm 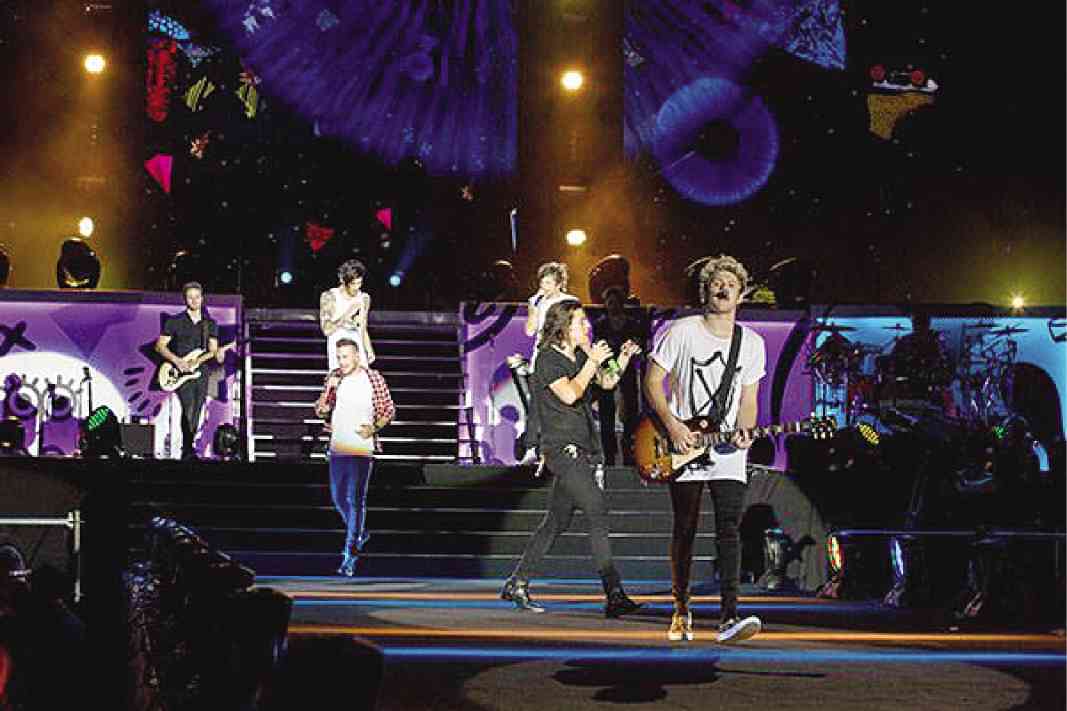 Boy band One Direction performs with all five members during a concert in Bangkok, Thailand. They arrived in Manila on Saturday and performed that night minus one member. CONTRIBUTED PHOTO

MANILA, Philippines–Murphy’s Law, or “whatever can go wrong, will go wrong,” may have caught up with English-Irish boy band One Direction (1D) as it performed without one key member, Zayn Malik, on Saturday night at SM Mall of Asia (MOA) open grounds in Pasay City.

The last of the group’s two-date concerts in Manila, part of its 2015 On the Road Again tour, will be held Sunday night at the same venue.

A statement from 1D management ascribed Malik’s failure to join the concerts to “stress,” though it wasn’t specified whether he was suffering from any ailment.

What seems to be more apparent is that Malik—regarded as the most vocally proficient member of 1D—has been worried stiff about his relationship with his fiancée, Perrie Edwards of the British girl group Little Mix, who has reportedly walked out of their shared house after she caught him cheating with another woman during the 1D concert in Bangkok a few days ago.

On Wednesday, Malik posted a cryptic message on his Twitter account: “I’m 22 years old … I love a girl named Perrie Edwards. And there’s a lot of jealous people in this world I’m sorry for what it looks like x.”

The object of Edwards’ ire has been identified as Lauren Rich, who was seen posing with Malik (whose right hand is touching Rich’s bare waist) in an Instagram photo that has been circulating on the Internet.

In any case, the group’s security in Manila has been described as “super strict” by Philippine media; TV crews had waited for the arrival of 1D’s other members—Niall Horan, Liam Payne, Harry Styles and Louis Tomlinson—at 1 p.m. Saturday but were unable to get clear footage, much less a word or two, because the entourage’s private plane headed straight into a private hangar and the group was whisked into waiting cars.

The arrival of the members of the band was kept under wraps that even as the reported time the plane was expected to land approached, media affairs personnel at Ninoy Aquino International Airport (Naia) said they had “no advice” on the flight details.

The lack of information on the group’s arrival prompted fans to wait for their idols at the MOA grounds instead of welcoming them at the airport.

The result was business as usual at Terminals 1 and 3. Passengers went about their business and the number of security personnel deployed appeared the same, as though no VIP was expected to arrive.

A Terminal 1 airport security member told the Inquirer that no word was given about a foreign boy band arriving there.

Reporters, on the other hand, tried to approximate where exactly the plane carrying 1D would land.

Some reporters positioned themselves inside the press office at Naia Terminal 1, while others made the rounds at Terminal 3 in the hopes of capturing on video or in a photograph the arrival of the popular boy band.

Other reporters left for MOA instead, saying they had better chances of taking a photograph or a video of the boys.

In the end, it was Civil Aviation Authority of the Philippines (CAAP) spokesman Eric Apolonio who confirmed the arrival of the band members, although he said he was unsure how many arrived on the plane.

“But if it’s just one flight, the four of them are on the same plane,” he said.

Apolonio said that based on a report he received, the band members arrived on a “private jet” and landed on the Aeges hangar, beside the presidential hangar near Terminal 3.

He said the hangar where the band members landed was where American President Barack Obama’s Air Force One also landed when he visited the country recently.

“If it’s a private plane, it’s the customs and the immigration officers who go there and process their documents,” Apolonio said.

Asked if the CAAP was taken by surprise by the group’s arrival, Apolonio replied in the negative.

He said the CAAP already received information that the band’s flight plan would be filed with them beforehand.

“It’s just normal for users of private planes to file their flight plans on the same day,” he said.

“OA” (overacting) was how security arrangements were narrated by a female representative of Smart, the country’s leading telecommunications company, which is said to have poured in more than P100 million as the Manila concerts’ main corporate sponsor.

“Sorry, 1D management did not allow any photos [to be taken],” Smart public affairs head Mon Isberto told the Inquirer in a text message.

Concert promoters, composed of officers from Music Management International and Ovation Productions, issued the following advisory to prevent confusion and untoward incidents among the audience, mostly composed of female adolescents and teeners:

Only patrons with the official event access card will be allowed entry. Fake tickets and fake access cards will be detected.

Keep your official event access card with you at all times. For security purposes, reentry will not be allowed.

Please bring a valid ID or any form of identification aside from the official event access card.

Pay attention to the announcements and list of prohibited items.

Large bags including backpacks and waist packs are subject to inspection.

Please take note that the sound during One Direction’s performance will be of high level. Attendees, especially small kids, are recommended to bring ear defenders.

For VIP access cardholders, claiming of VIP Hot Package is located inside the VIP section. Please have your official event access card and ID ready.

Standing sections (Silver and General Admission/Bronze) are limited to 12 years old and above only. Valid ID with birthdate should be presented upon entry.

Attendees aged 12 to 16 should be accompanied by an adult with an official access card. No valid ID, no entry.

The following will be asked to sign a waiver before entry: pregnant women; and parents and guardians of children below 4 feet or 12 years old.

For those who have not claimed their official event access cards yet, booths will be set up at the North Wing, Entertainment Mall, SM Mall of Asia: Ground floor, near TGIFridays; and Second floor, near IMAX lobby.

Umbrellas (Raincoats/ponchos will be available for sale inside the venue.)

Big posters, flags, banners, placards, signages (A3 size or 12 x 18 inches and above)

Weapons and any sharp objects;

Candles, air horn, fireworks and any kind of pyrotechnics;

Chairs of any type.

Four members of One Direction now in PH

One Direction fans troop to one direction: Mall of Asia concert grounds