One Direction fans troop to one direction: Mall of Asia concert grounds

MANILA, Philippines—Thousands of One Direction fans are headed to one direction—to Mall of Asia (MOA) concert grounds in Pasay City—on Saturday night for the first-ever concert in the country of the popular British boy band.

The concert, part of the group’s “On The Road Again Tour,” would have a two-night show at MOA Open Grounds on March 21 and 22.

Members of One Direction Niall Horan, Harry Styles, Louis Tomlinson and Liam Payne arrived at the Ninoy Aquino International Airport (Naia) on Saturday onboard a private plane at 1:55 p.m., a few hours before their concert.

Concert organizers have reminded concertgoers to bring a valid identification card aside from their access cards to be able to enter the concert grounds. They have also released a list of other things to keep in mind before and during the concert. 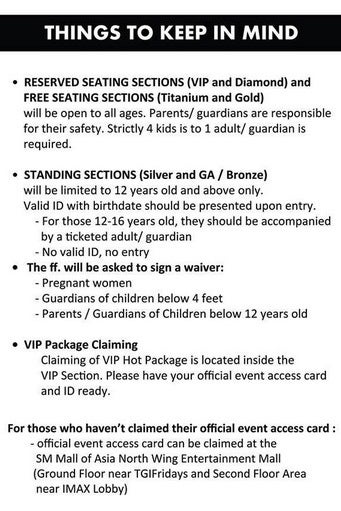 Nancy Collado was among the thousands of fans who trooped to MOA concert grounds on Saturday. But Collado said she won’t be watching the concert. She told INQUIRER.net that she only accompanied her daughter who was a One Direction fan.

She said they bought their concert ticket last year.

Her daughter, Collado said, held a garage sale to be able to come up with the amount needed to buy a ticket.

Another fan, Hannah de la Cuesta, said she came all the way from Cavite to watch the group live.

“I really want to see them. I hope they will notice me,” she said.

As of posting, thousands of Filipino fans are at MOA concert grounds to witness One Direction perform. Nestor Corrales with a report from Allan Policarpio, Philippine Daily Inquirer