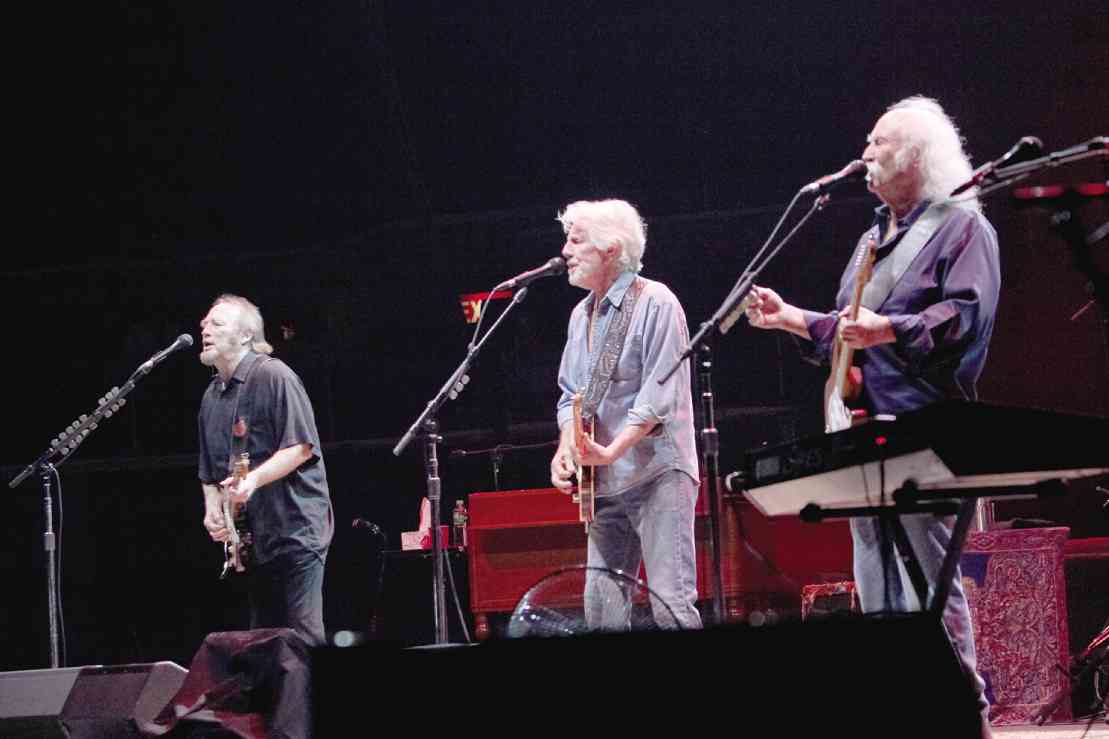 “If I had ever been here before, on another time around the wheel, I would probably know just how to deal with all of you… I feel like I’ve been here before.”—(“Déjà Vu,” 1970)

It was their first time in the Philippines. But when poets/musicians David Crosby, Stephen Stills and Graham Nash speak/sing about being anywhere, laws of nature hardly apply.

Greying rakistas flocked to the Smart Araneta Coliseum on Monday night, each one with a virtual set list in his head—and only those who had defied their bedtimes to hear the trio’s version of “Woodstock” went home disappointed. (It wasn’t played.)

Woodstock, of course, is also the historic four-day arts and music festival in 1969 (on a sprawling farm in New York state) that introduced Crosby, Stills and Nash—with Neil Young making them a quartet—to most of their faithful (“rabid” sounds too harsh for “Peaceniks”) Filipino followers.

Expectedly, on all those virtual set lists were the classics whose melodies have cast an unbroken spell on fans worldwide. These songs elicit the same swooning, sometimes tearful, always enthusiastic, reaction from audiences to this day, over four decades later: “Carry On/ Questions,” “Our House,” “Helplessly Hoping,” “Suite: Judy Blue Eyes,” “Teach Your Children.”

Let alone the melodies, the lyrics, it turned out, are seared into memories independent of, in many cases, the song titles. So not a few audience members at the Big Dome would be robustly singing along —“I am yours, you are mine, you are what you are…”—but would then be hard-pressed to attach a title to the words. Could be failing (more romantically, fading) memory.

It didn’t matter. There was nearly palpable latitude all night between artists and fans. As Harry Connick Jr. recently told an “American Idol” finalist who had become precariously emotional during a performance: “Were there pitch issues? Yes. Was it a problem? Not a bit, given your effect on the crowd.”

It became clearer with every number that the cheering crowd had come for more than technical perfection; it was nostalgia that they sought to fine-tune.

Flawless vocals—and there was a lot, especially in the second half when the band seemed more relaxed (Nash brandished a wine glass, possibly with real wine in it)—and some mean guitar playing were definitely extra treats.

The main course, apparently, was the avalanche of private recollections from the magical time that these celebrated performers, as artists, were at the forefront of.

Messages of peace and love have sustained the trio’s music. They are, after all, Rock and Roll Hall of Famers twice over as much for their songs as for their advocacies. But that’s another aspect, altogether, of their influence on American culture and global music. Monday night’s event was all about the good feelings, much of them romantic, but not all.

It’s true what they say about people telling their own stories: The longer they’ve lived, the more touching the tales become, even if they’re the same ones.

Crosby, Stills and Nash singing their songs live, in person, made even little-noticed lines nudge awake sluggish hearts and minds. Like so:

From “Southern Cross”: “And my love is an anchor tied to you with a silver chain.”

From “Delta”: “Thoughts like scattered leaves slowed in mid-fall into the streams of fast running rivers of choice and chance.”

From “Marrakesh Express”: “I smell the garden in your hair.”

And of course, a line that could have been written only when it was, with little risk of reproach or censure: “If you can’t be with the one you love, honey, love the one you’re with.”

It would seem odd that we are reminded of another poet/musician’s words when looking back on this experience. Paul Williams, in “Waking Up Alone”: “I could go back to the place but not the time.”

Crosby, Stills and Nash did their devotees a huge favor. Never mind the place; they certainly brought us back to the time.