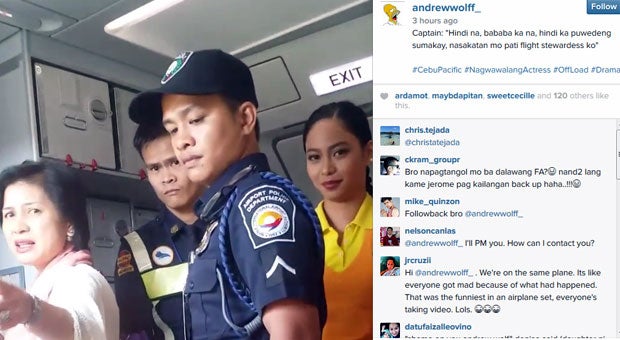 MANILA, Philippines—Actress Melissa Mendez said she would seek the help of the women’s rights group Gabriela in relation to an incident at the airport on Friday morning involving two fellow passengers whom she claimed to have “humiliated, offended and threatened” her.

The 50-year-old actress admitted to having been offloaded from a Cebu Pacific plane en route to Pagadian City. This was after she slapped a fellow passenger, a friend of athlete-actor Andrew Wolff, for allegedly “disrespecting” her.

The other passenger was identified as Rey Pamaran by a source from Cebu Pacific.

“I will seek the opinion of Gabriela on what to do with these men. Andrew Wolff’s friend taunted me, bullied me. He said many offensive and degrading things to me. This was why I slapped him,” she told the Inquirer by phone. “If there’s an action, there’s an equal reaction.”

In an Instagram post, Wolff said the actress, “who had the initials of M.M.,” refused to leave the reserved seats supposedly for his friend. He added that the actress only agreed to return to her designated seat after being asked to “(move) by the flight attendants, captain and ground security.”

Wolff said the actress even “smelled like a beer brewery” and that she kept cursing at Pamaran.

“First of all, I was not drunk. I don’t even drink alcohol,” said Mendez. “Second, I have been on a juice diet for several months now. It was possible that what they smelled on my breath was the juice that I drank before leaving the house that morning. It was a mixture of beetroot, papaya, pineapple and watermelon. I didn’t take in any alcoholic drink.”

Mendez added: “The reason was really so simple. These men just chose to blow it out of proportion. It was true that I sat on the 1A seat, which wasn’t reserved for me. This was only because I had wanted to take pictures of the clouds. I asked if I could stay there until such a time when I am able to take good photos of the clouds,” she recalled. “When I asked Andrew’s friend, he said ‘Hindi pwede. Binayaran ko ‘yan.’ I said I will not take long. Makikisuyo lang. It was when he told me, ‘Pag ‘di ka pa umalis d’yan hahampasin na kita ng bag ko sa mukha mo.‘”

Mendez said she was offended by Pamaran’s reaction. “He is a full-grown man. I am a woman in my 50s. Why would he talk that way to me? He was so disrespectful. Nagpantig ang tenga ko so I said ‘ang kapal naman ng mukha mo. Wala naman akong ginagawang masama sa iyo.’”

Mendez said they exchanged more “hurtful words” until the pilot came to pacify them. “Andrew’s friend kept talking when we were already in our seats. I told Andrew to ask his friend to stop. Andrew said ‘I don’t know you!’ This hurt me more because he used to be a friend of my daughter Denisse.”

Mendez said she stood up once again to approach Pamaran. “I had wanted to make peace with him, because I sensed that he’s a powerful man. I had wanted for things to be okay with him before we land. I sought the permission of a stewardess before approaching him.”

Mendez added: “I was calm when I went up to him. He covered his nose with a magazine and then said, ‘lumayo ka nga sa akin. Bad breath ka! Magsipilyo ka nga. Nakakadiri ka!‘ It was then when I slapped him. What he told me was really humiliating.”

Mendez said she was scheduled to fly to Pagadian City to host a show. “My producers said I will no longer fly there because kalat na kalat na sa Pagadian ang nangyari. I’m assuming that it’s not safe for me to go there anymore because Andrew’s friend is very influential there,” she said. “I was only going there to work. Just because he’s from an affluent family ganito ang mangyayari sa akin?”

Mendez said she would not apologize for slapping Wolff’s friend. “If there’s someone who should apologize, it should be Andrew’s friend, and Andrew—he should have mediated. He did nothing.”