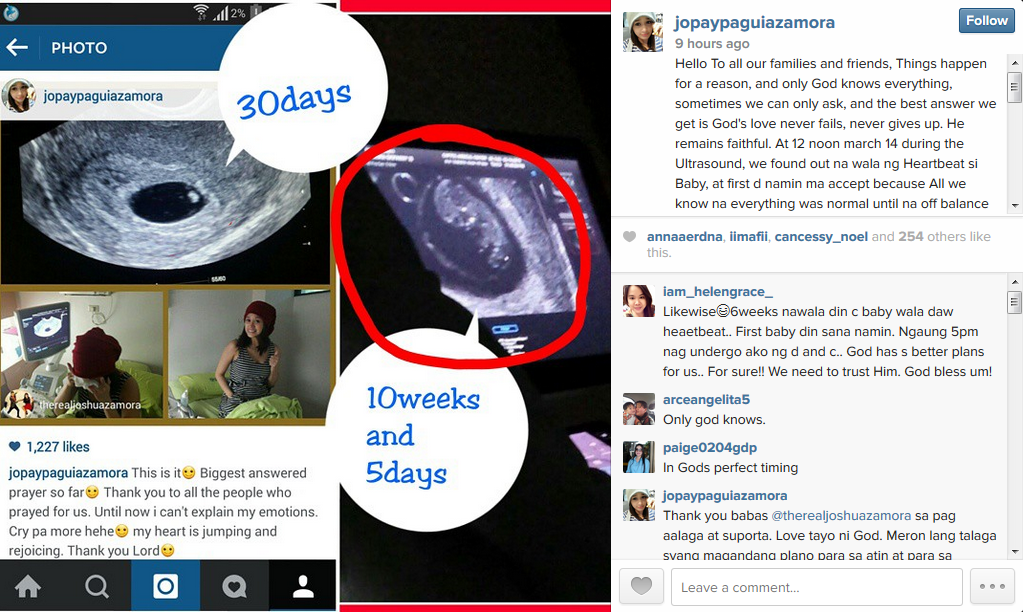 MANILA, Philippines—Like what happened to actress Mariel Rodriguez, actress and former Sexbomb Dancer Jopay Paguia has also suffered the miscarriage of her first child with husband Joshua Zamora. The miscarriage was confirmed by the couple on Wednesday through their Instagram account.

According to Paguia the child, who was 10 weeks and five days old, lost heartbeat and had a weak grip in the womb. Before that, Paguia said she suffered bleeding when she lost her balance. She was rushed to the hospital but was sent home after being cleared by a doctor. But she soon went back for treatment when the bleeding did not stop.

This was the couple’s update as posted on Instagram: “Hello to all our families and friends. Things happen for a reason and only God knows everything. Sometimes we can only ask and the best answer we (can) get is God’s love never fails, never gives up. He remains faithful.

“At 12 noon, March 14, during the ultrasound, we found out na wala ng heartbeat si baby. At first ’di namin ma-accept because all we know (was) everything was normal until na-off balance ako the other night (March 13 ) and found out (I was) bleeding after 2 hours. So we rushed to the ER and after checking it they sent us home. After sleeping for 4 hours I woke up and still (there was) bleeding … so we had to rush back to the hospital. And after the ultrasound it was announced na wala nang heartbeat ang baby.

“But now little by little nagiging OK na muli ako. Only God can restore everything back to normal. He will make all things new and refresh(ed). It’s all a matter of trust. God is our refuge. Thank you for all your prayers. God bless us all. No worries, I’m OK na—Josh and Diof.”