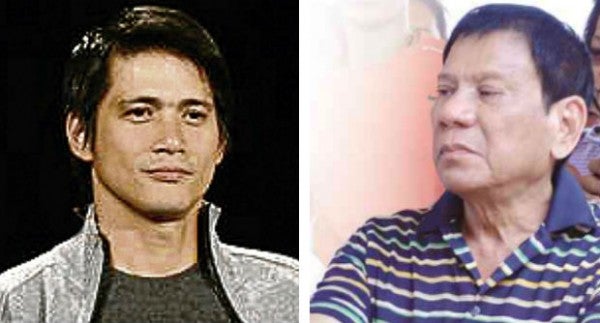 MANILA, Philippines—Actor Robin Padilla said he will support Davao City Mayor Rodrigo Duterte if he decides to run for President in the 2016 elections. Padilla is a Muslim convert who goes by the name Abdul Aziz.

In a photo posted on his Instagram account, Padilla was seen wearing a black shirt with the message “Duterte, Atin To Pre!”

Padilla captioned the photo: “and his words will soon be Flesh … Katipunan, the dream must now be realized… Let the Punisher begin.”

Duterte’s camp said that Padilla and his brother Rommel visited Duterte in Davao City last Saturday to pledge their support for the mayor should he push for his candidacy.

Aside from backing Duterte’s possible 2016 bid, Padilla also asked the mayor’s permission to make a movie about his life.

“In rejecting Robin Padilla’s offer to do a movie on his life, Duterte said in jest that the cost of the production of the movie will be very high because ‘there will be so many leading ladies’,” the statement from Duterte’s camp read.

He also cited that he is a very private person, even shunning recognitions which might tag him as “epal.”

In a recent forum held in a university in Manila, Duterte said that the presidency is a “long shot.”

However he also said despite having many good candidates in Metro Manila, “the best is in Mindanao.” AJH

In absence of choice, Duterte says he’s it