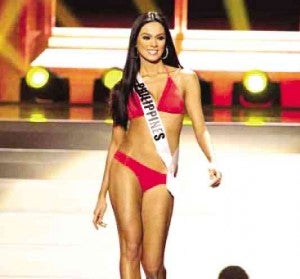 The country can expect another strong showing in international beauty contests with this year’s batch of Binibining Pilipinas hopefuls, according to two local beauties who made waves in the Miss Universe pageant.

For 2010 Miss Universe fourth runner-up Venus Raj and 2013 Miss Universe third runner-up Ariella Arida, a good number of the aspirants for the 2015 national pageant are ready for the big league.

“A lot of them are beautiful and tall,” Raj told the Inquirer on the media presentation day, Feb. 17, at Hotel Sofitel’s Sunset Pavilion. “This batch is gorgeous,” said Arida, a judging panel member alongside Raj, several Bb. Pilipinas Charities Inc. (BPCI) officials and other personalities. For fashion director Raymond Villanueva, it’s the “sexiest” batch.

The Sofitel event was one of many where the 34 contestants will be placed under scrutiny prior to the selection of the Top 15.

Raj explained: “We were instructed to choose our best 15. These aren’t the 15 for coronation night, just those who stood out today.”

Christi Lynn McGarry—2010 Mutya ng Pilipinas-Asia Pacific International, 2012 Top Model of the World semifinalist and Queen of Asia and Oceania at the 2010 Miss Intercontinental—is also in the race, along with former Miss Philippines-Air titleholders Kimverlyn Suiza and Nancy Lee Leonard. This is Suiza’s second attempt.

The prepageant TV special, “The Road to the Crown,” airs Sunday night on ABS-CBN’s “Sunday’s Best” block. The 2015 Bb. Pilipinas coronation night will be staged at Smart Araneta Coliseum on March 15, and telecast on ABS-CBN on the same evening.