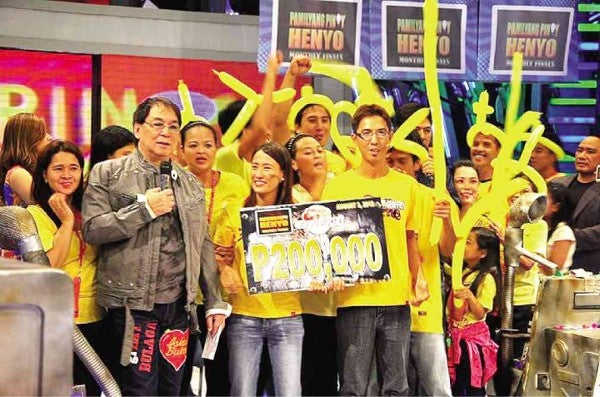 When “It’s Showtime’s” newest talent tilt, “Ang Switch Naman,” started some weeks ago, it came across as an interesting novelty, but rather lacking in “possibilities.” After all, what more can you do with a competition in which a male and female pair, spouses or partners in real life, cross-dress and perform a number together?

Yes, it can be fun to see guys pretending to be girls, and vice versa, but after a few such performances, predictability does set in, doesn’t it?

But, as we keep watching the novelty talent tilt, it’s acquiring new facets that are making it more of a viewing treat than before, thanks to the idiosyncratic personalities of some of the couples it has been featuring.

Also interesting and sometimes even touching are the stories that the couples are invited to share about the ups and downs their relationships have gone through, which viewers can learn from if they’re so disposed.

Another plus point is the show’s penchant for going from comical fantasy to reality by later asking the couples to remove their wigs and moustaches, to reveal themselves as they really look.

The couples who usually make the best impressions are not necessarily the most gifted performers, but those who come across as “taong tao.”

In radical contrast, the show’s other ongoing talent tilt, “Kalokalike,” invites stars’ lookalikes to appear and perform on the program as the popular celebrities they’re supposed to be clones of.

We say supposed, because every once in a funny-ridiculous while, a putative lookalike doesn’t look at all like the star he’s ostensibly the spitting image of!

The latest instance of this was a rather undernourished guy who performed as—Coco Martin! He did wear Coco’s signature shirt, and shades big enough to cover a full third of his face, and he did attempt to approximate Coco’s lopsided smile—but, he was so not Coco that 98 percent of the studio audience dismissed him as more “kaloka” than “kalokalike!”

At other times, however, the impersonations featured are spot-on, as in the case of cohost Anne Curtis’ (many) clones, one of whom even made it a point to “sing” as badly as the original.

Another Anne Curtis lookalike was obviously gay, but came across as amazingly as Anne, especially with his luscious, rosebud lips, which were—to die for!

On “Eat Bulaga,” the best talent and game tilt is still “Pinoy Henyo,” which after many years of telecasting has become practically an “Olympics-level” competition. We’re colorfully exaggerating, of course, but it has become much bigger than before, with entire school districts fielding their best pairs.

In addition, all sorts of novel pairings have been thought up, like a special edition for senior citizens and their grandchildren.

That was a particularly novel edition, because it showed how the generations could work well together—even if the grandkids did get impatient with their lolo or lola when they had their “senior moments!”

As for the school representatives, some of them have become such experts at the game that they’ve devised intricate “codes” to speed up their guesswork, with the winners being able to get the correct answer in only a few seconds!

We feel really slow and dumb when we watch these homegrown “geniuses” in action—but we continue to catch the game whenever it’s played, because it’s so amazing—and so “us!”