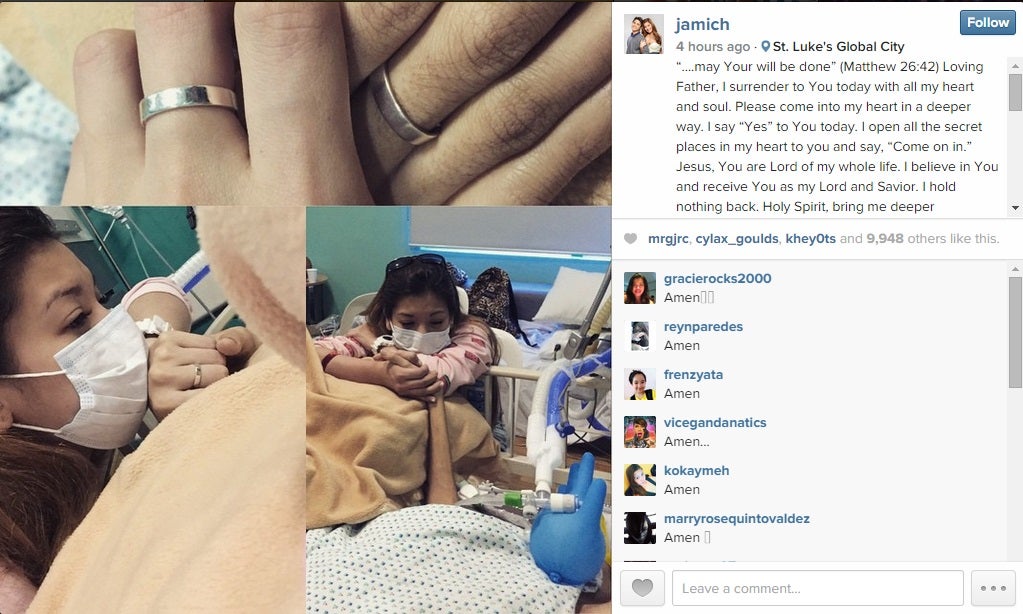 Sebastian has been diagnosed in March 2014 with lung cancer and has since been undergoing chemotherapy treatment.
In a Facebook post by Christopher Joseph Liggayu, the father of Sebastian’s fiance Michelle, he said that Jam is on critical condition.

“Friends, our Jam is holding on for dear life but he is in life support or a ventilator,” the older Liggayu’s post read.

Sebastian and Liggayu have been engaged since May 2014, two months after they found out Sebastian was stricken with cancer.

Sebastian wanted to walk the aisle with his girlfriend one day and promised to marry her amid his condition.

But Liggayu’s father has a meaningful message.

(Jam, your promise to marry Pao once you get well…it’s okay son. It’s okay with me. I’ve long treated you as a son so don’t worry about it. We’ll take care of Pao.)
“OK na ‘yun Lord, he put up a good fight. Hindi na namin kaya makita na nahihirapan sya,” he added.

(It’s okay Lord. He put up a good fight. We can’t bear to see him suffering any longer.)

Earlier this month, Sebastian told his family that he wanted to have mercy killing and end the fight against cancer due to extreme pain. But his mother refused.

Aquino said she went straight to the hospital after attending the welcome honors for French President Francois Hollande in Malacañang.

She said she knew the “urgency” to visit the cancer-stricken Sebastian.

“Tonight I had the privilege of meeting a mother whose LOVE for her 2 sons mirrors mine. Mommy Maricar was so appreciative of my effort & I realized all of us mothers will be grateful for kindness shown to our children,” she posted on her Instagram account.

“I should be the 1 thanking her, for reminding me to continue prioritizing & treasuring my sons even more. My prayers are w/ her, their family, close friends and Jam- that God may ease his suffering. And that they will continue to have unwavering faith in our Creator’s love,” the post added.

The video of Aquino’s visit has been posted on Instagram by Liggayu’s father.

Aquino is just one of the many celebrities who had visited Sebastian. The others include comedian Vice Ganda, Jhong Hilario and inspirational speaker Bo Sanchez.

Other celebrities as well as fans of the popular online love tale also posted on social media their prayers and support for Sebastian, among them Yeng Constantino, Mikey Bustos, and Ramon Bautista.

“Let us pray po for Jam of Jamich,” Constantino said.

“Everyone please pray for Jam of Jamich who is now on life support. So distraught at the news. May God be with him, Michelle & family,” Bustos said.