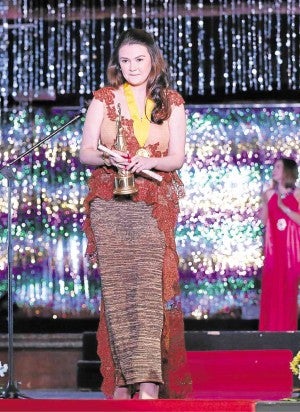 “So this is what it feels like to receive an award from teachers!” quipped Angel Locsin in her acceptance speech as best actress (TV) at the 13th Gawad Tanglaw held recently at the Ernesto Palanca Crisostomo Hall of the University of Perpetual Help System-Dalta in Las Piñas City.

Clutching a trophy and a certificate, a medal hanging from her neck, Angel said it must be difficult for the academe-based group of media critics that comprise the Gawad Tanglaw board to mount such an event. “I thank the teachers who made time to watch and examine our shows,” added Angel, who won for her performance in “The Legal Wife.”

She shared the award with fellow ABS-CBN talent Julia Montes of “Ikaw Lamang,” hailed best TV series. “We all look up to teachers; for them to recognize my work is overwhelming,” Julia told the Inquirer.

Many of the winners likewise said being acknowledged by educators was an honor. “You have to give back the respect by loving your job even more,” said Piolo Pascual, best actor (TV) for “Hawak Kamay.” He told the Inquirer. “You should find roles that [audiences] will learn from and be inspired by.”

Coco, one of the event’s biggest draws, echoed Piolo’s sentiment. “An actor has a big responsibility to his viewers,” he told the Inquirer. “This is the fruit of my hard work, made special because it’s from teachers.”

Arnold Reyes, recipient of the Presidential Jury Award for Excellence (theater, TV, film), was “deeply touched” by his award because, he said, his late mother was a teacher, too.

Gawad Tanglaw founding chair Dr. Romeo Flaviano Lirio explained that, more than the technical aspects of a program or performance, the board—composed of humanities professors from member schools—put premium on values and progressive thought. 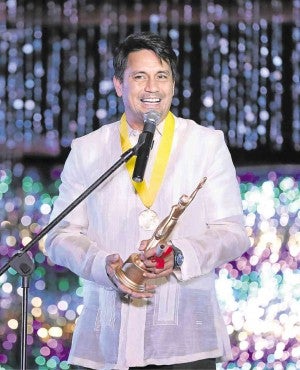 “A show or an actor should have a finger on the pulse of viewers, especially students,” he told the Inquirer. “While we teachers select winners, it’s important for us to know they impact the students.”

Ambeth Ocampo was declared best columnist for his PDI opinion column “Looking Back”; Cristy Fermin, best entertainment columnist (Filipino) for “Chika!” which comes out in Bandera.

Because the list of winners is traditionally ahead of the awards rites, the celebrities always come to the GT Awards relaxed and upbeat, guaranteeing more time mingling with fellow awardees and fans.

At this latest gathering, arrivals of big stars were announced by screaming and cheering from the audience and spectators outside the hall—occasionally jolting those giving their speech onstage. 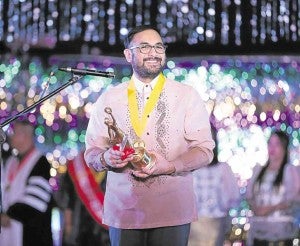 Superstar Nora Aunor turned up a few minutes before she received her best actress (film) trophy for “Dementia.”

“It’s great to see you all,” Nora said in her acceptance speech. “This award reminds me of my student days. It always feels special when teachers honor you.”

The veteran actress later told the Inquirer. “I have won many awards, but each new one surprises me still. That teachers critiqued our work gives me assurance… I trust their judgment.”

Some of the other winners in entertainment: 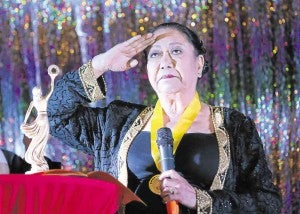