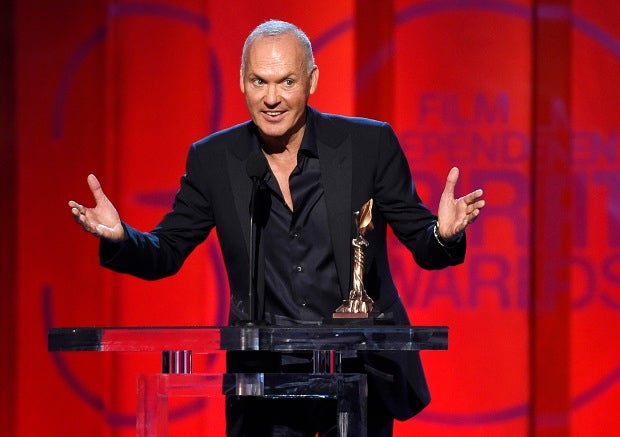 Michael Keaton accepts the award for best male lead for Birdman or (The Unexpected Virtue of Ignorance) at the 30th Film Independent Spirit Awards on Saturday, Feb. 21, 2015, in Santa Monica, Calif. (Photo by Chris Pizzello/Invision/AP)

SANTA MONICA, California, United States — A day before it may soar at the Oscars, “Birdman” spread its wings at the 30th Independent Film Spirit Awards, winning best picture, best actor for Michael Keaton and best cinematography.

The elegantly stitched together backstage comedy came away the big winner at the annual pre-Oscars afternoon celebration of independent film on Saturday. Alejandro Gonzalez Inarritu’s “Birdman” won over what many consider its stiffest competition, the 12-years-in-the-making “Boyhood,” though that film’s maker, Richard Linklater, still took the directing honor.

As Hollywood has increasingly devoted itself to global blockbusters, the Spirit Awards — once a casual indie appetizer to the Oscars — feels more and more like the center of the industry, or at least a more idealized version of it. Set in a beachside tent in Santa Monica the day before the Academy Awards are held across town, the Spirits — broadcast live this year for the first time — variously boasted of growing prominence and of preserving a way of moviemaking often regarded as obsolete at the studios.

“We are threatened to become a species in extinction,” said Inarritu, the Mexican filmmaker, accepting the best feature award.

But the blur between the Spirit Award and the Oscars, despite their vastly different dress codes, is nearly complete. Last year’s acting Spirit winners all mirrored the next day’s Oscar winners, and “12 Years a Slave” triumphed at both ceremonies.

The same could be true this year, where Oscar front-runners Julianne Moore (“Still Alice”), J.K. Simmons (“Whiplash”) and Patricia Arquette (“Boyhood”) all won Spirit Awards. (Notably absent, however, was possible best-actor winner Eddie Redmayne from “The Theory of Everything,” a movie that wasn’t eligible.)

“I’ll be in the fetal position, bawling, three months from now, missing it,” said an exuberant Keaton. Before “Birdman,” the 63-year-old veteran actor had never been nominated for an Oscar.

But even if the Spirit Awards can feel more and more like an Academy Awards dress rehearsal, they still seek to highlight films that often struggle to get made or to find distribution.

“We made this movie in 23 days for $4 million,” said Moore of the Alzheimer’s disease drama “Still Alice.”

“I brought my own bras, and my own food. I begged my friend Alec Baldwin to do it,” she said. 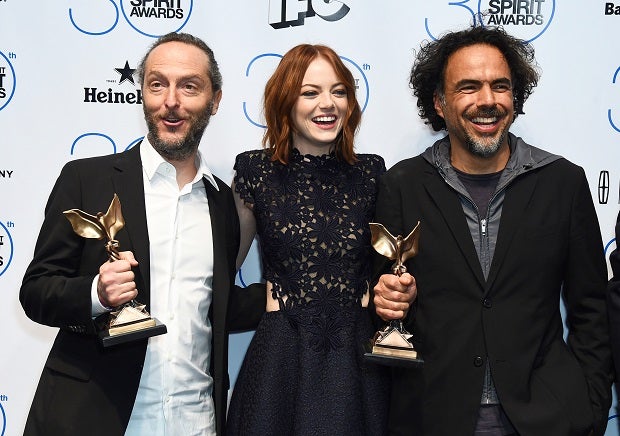 Emmanuel Lubezki, from left, Emma Stone, and Alejandro Gonzalez Inarritu pose in the press room with the award for best feature for Birdman or (The Unexpected Virtue of Ignorance) at the 30th Film Independent Spirit Awards on Saturday, Feb. 21, 2015, in Santa Monica, Calif. (Photo by Jordan Strauss/Invision/AP)

Gilroy, who recalled years of writing screenplays to bigger-budget films that never got made, tersely applauded those in attendance as “holdouts of a tsunami of superhero movies that have swept over this industry. We have survived. We have thrived.”

The line the Spirit Awards straddle wasn’t always so clear. Hosts Fred Armisen and Kristen Bell opened the ceremony with a medley, with Armisen singing, “I’m a little bit indie,” and Bell echoing “I’m a little bit studio.” The biggest gasp in the audience came when Paul Thomas Anderson, who shared in the Spirits’ Robert Altman Award for the ensemble cast of his “Inherent Vice,” dared to criticize a sponsor, cursing American Airlines for losing his bags.

Later, director Bennett Miller, whose “Foxcatcher” won the Special Distinction Award for its uniqueness of vision, read a note from a remorseful Anderson: “I said some bad things. I feel bad. I was trying to exhibit my independent spirit. I thought if I wore a flannel shirt and said a bad word, you would love me more. My apologies to American Airlines. It was actually United.”

But the theme of commerce versus art held throughout the Spirit Awards, where winners lamented thinner checks but took pride in more soulful films. When “Boyhood” star Ethan Hawke accepted the best director award for an absent Linklater, he called the film “a flare gun” to inspire other radical visions.

“What Rick always said: it’s the Wild West out there. This art form is so young,” Hawke said. “There are so many stories to be told and it’s going to be told not by corporate America but by you.”

One of the awards’ most moving speeches came from Justin Simien, who won best first screenplay for his “Dear White People” script, a satirical comedy about black students at an Ivy League college.

The awards are put on by Film Independent, a group of filmmakers, industry professionals and movie buffs, who generally select films made with a budget of $20 million or less.

Hollywood prepares for its Oscars close-up