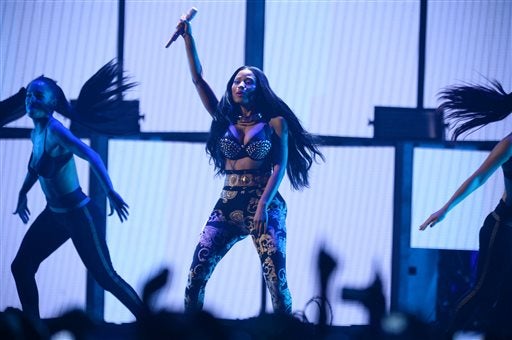 FILE – In this Sept. 19, 2014 file photo, Nicki Minaj performs at the iHeartRadio Music Festival in Las Vegas, Nev. Minaj says two members of her tour have been stabbed in Philadelphia, one of them fatally. Minaj wrote on Twitter Wednesday, Feb. 18, 2014, that the two had flown into Philadelphia for rehearsals two days ago. Philadelphia police say two men, ages 29 and 26, were stabbed early Wednesday outside a bar. They say the 29-year-old was killed and the younger man critically wounded. (Photo by Al Powers/Powers Imagery/Invision/AP, File)

PHILADELPHIA— A fight and stabbing outside a bar early Wednesday (US time) left one member of Nicki Minaj’s tour dead and another in critical condition.

The tour members had flown into Philadelphia for rehearsals two days earlier, Minaj wrote on Twitter.

Police identified the man who died as Devon Pickett, of New York City. The identity of the other man hadn’t been disclosed.

Pickett, who was 29, suffered multiple stab wounds and was pronounced dead shortly after arriving at a hospital, police said. The other man, who’s 27, was stabbed in the left side and arm, they said.

Both were taken to the hospital by car before police arrived at the Che’ Bar and Grill, police said.

Police said the fight began when a man started arguing with the victims inside the bar at about 2 a.m. and pulled a knife once they got outside.

Minaj posted a link to a TV report on the bar stabbings.

“Another senseless act of violence that took the life of a great guy. So sad,” Minaj wrote.

Minaj’s tour begins March 16 in Europe, according to her website. The rapper, who was born in Trinidad and grew up in New York, is known for such hits as “Anaconda” and “Bang Bang,” her pop song with Jessie J and Ariana Grande.