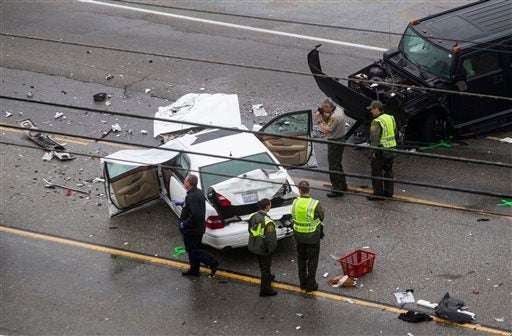 Los Angeles County Sheriff’s deputies investigate the scene of a car crash where one person was killed and at least seven others were injured, Saturday, Feb. 7, 2015. Olympic gold medalist Bruce Jenner was in one of the cars involved in the four-vehicle crash on the Pacific Coast Highway in Malibu, California, that killed a woman, Los Angeles County authorities said. AP PHOTO/RINGO H.W. CHIU

LOS ANGELES–Reality TV star Bruce Jenner was involved in a car crash on Saturday that killed one woman, but police said there was no evidence he was being chased by paparazzi when the accident occurred.

The Olympic decathlon champion was unharmed after the collision involving four cars on the Pacific Coast Highway in the Los Angeles metro area, though several people were injured, TMZ reported.

“As of right now, there is no indication that Bruce Jenner was being chased by paparazzi at the time of the crash,” LA County Sheriff’s Department Lieutenant John Lecrivain told CNN.

“There was a possibility that paparazzi was following him at the time of the crash, but that is a very regular occurrence, and (there is) no indication at this time it was a contributing factor of the crash.”

Jenner was driving a large SUV when he collided with a smaller white car that then swerved into oncoming traffic, TMZ reported. The driver of the visibly damaged white car died.

Jenner was pictured at the scene in sunglasses and a baseball cap standing upright with no obvious injuries and was driven away in a police cruiser following the accident.

The former stepfather to Kim, Kourtney and Khloe Kardashian has been seen on their reality television program angrily confronting photographers in the past.

The 65-year-old has been at the center of frenzied speculation in recent months that he may soon come out as transgender.

People magazine, a trusted conduit for Hollywood publicists, has reported that the motivational speaker and former actor would open up on his gender in a forthcoming interview with ABC News.

Jenner became an American sports hero when he set a world record with his Montreal decathlon victory in 1976.

But it was through his marriage to the former Kris Kardashian that he once again became a household name with the reality TV series “Keeping Up with the Kardashians,” in which he appeared as the sometimes bemused stepfather of her flamboyant daughters.

The couple married in 1991 and have two daughters together, Kendall and Kylie. Bruce and Kris Jenner are recently divorced.

The family’s exploits have been well-documented, both on their reality show and by hungry paparazzi.

Kim is married to hip hop heavyweight Kanye West, Kendall is a much-photographed fashion model and Khloe’s on-off romance with rapper French Montana has played out in the public eye.

Their reality show has spawned several spin-offs, including seasons filmed in Miami and in the Hamptons, that have featured the family’s business ventures, personal travails and sibling dramas. Jenner has been a regular fixture on the programs.

Speculation that Jenner is undergoing a sex change has been rich fodder for supermarket tabloids for months.

Paparazzi photos from Los Angeles have captured him with shaved limbs, long hair worn in a ponytail and what appears to be a sports bra under a T-shirt.

In late January, Jenner was seen emerging from a Beverly Hills clinic with a bandage around neck, presumably after surgery to flatten his Adam’s apple.

But he has been lying low recently ahead of the premiere of a documentary that will reportedly chronicle his gender transition.