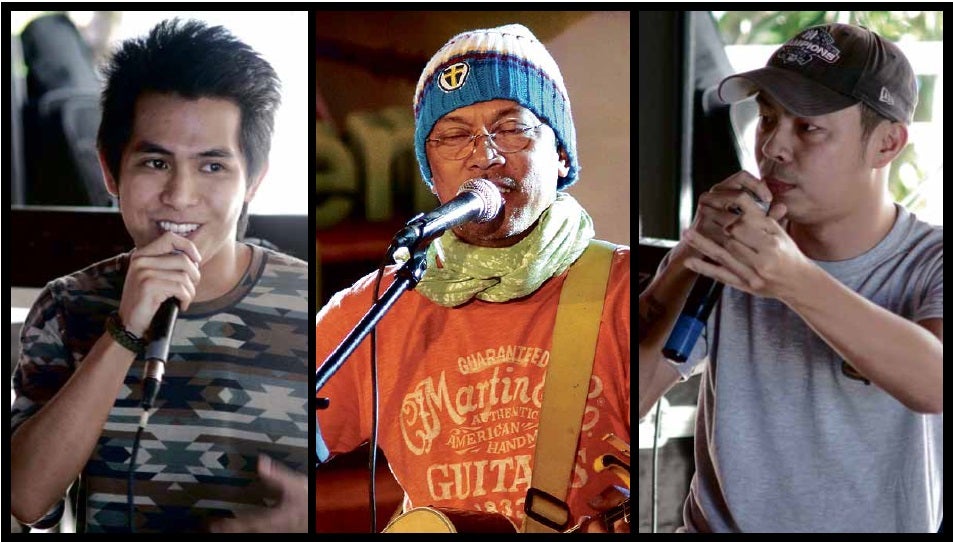 Top artists (from left) Abra, Noel Cabangon and Chito Miranda enjoy meeting singers and songwriters who make it to the Elements camp.

In this elite music “school,” which only a select group of singers and songwriters from around the country get to attend, the teachers learn as much as the students, if not more.

This is why, around March of every year, some of the biggest names in the music industry eagerly await the call to take part as mentors in the Elements National Singing-Songwriting Camp, which completed its fifth run in November last year.

Raimund Marasigan of the Eraserheads, Sandwich and Squid 9 describes the Elements camp as “an entire college course” compressed over five days. He said he learned, along with the campers, new and effective approaches to making music and performing before an audience.

Marasigan says he particularly liked the talk of theater veteran Audie Gemora, who talked about “owning” the stage to grab the audience when performing live; and scriptwriter Ricky Lee, who stressed anew the importance of original Filipino music in Filipino culture.

Conductor Gerard Salonga, a mentor for the first time in 2014, says the camp, which gathers 60 singer/songwriters who passed a rigorous audition process, reinforced his belief that the Philippines was a country “rich in creative musical talent.”

Salonga stresses, however, that there is a dire need for “proper” training to better prepare aspiring singers and songwriters for a career in making music, considering the intense competition in the marketplace.

He adds, “Education is not necessarily formal, but hours and hours of work develop a comprehensive understanding of why music does what it does.”

For his part, singer and songwriter Joey Ayala, who has been with Elements since its inception in 2010, says the camp cemented his view that songwriting is the product of “20 percent nature and 80 percent nurture.”

For Parokya ni Edgar front man Chito Miranda, the Elements camp, which is mounted by 7101 Music Nation headed by Tao Corp. CEO Julio D. Sy Jr., is more of a retreat, one special week every year during which he gets back to his roots and appreciates once again the reason that he got into music in the first place—that is, to express himself in a meaningful and sincere way.

Thus, despite his ultra-busy schedule, Miranda says, he does his best to set aside that one week for his mentor duties in Elements, which include guiding the campers through the exercises and sharing his own experience when he was just starting out in the industry.

Miranda describes the camp as inspiring, certainly one that he would not mind attending every year, even if he had to pay for his own plane ticket.

Another fulfilled mentor is rapper Abra, an ambassador of the Organisasyon ng Pilipinong Mang-Aawit, who says he was “blown away” by the unique experience, from hearing the original compositions of talented young singers and songwriters, to talking shop with the established names in the industry and senior camp advisers, such as composers Ryan Cayabyab, Jim Paredes and Noel Cabangon.

The award-winning Abra says he went home with renewed energy to create music, and that the interaction with both the mentors and the students widened his horizons, adding that he is confident the experience will help his own burgeoning career.

Like some 20 other mentors who took part in the previous camp, Abra is waiting with bated breath for the call to go back to Dumaguete this year for another dose of music and magic.