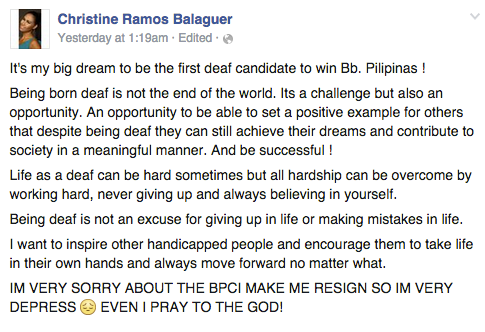 A “depressed” Christine Balaguer, initially in the list of official candidates released by Binibining Pilipinas Charities Inc. (BPCI), announced on Facebook that the organization has asked her to step down from this year’s pageant.

“I’m very sorry about the BPCI make me resign so I’m very depress. Even I pray to the God (sic),” Balaguer said in a post.

Balaguer also confirmed it with entertainment website Pep.PH on Thursday night but she did not disclose the reason she was asked to leave the competition.

In the Facebook post, however, Balaguer said “being deaf is not the end of the world” and that it’s her dream to be the first deaf candidate to win Binibining Pilipinas.

“It’s a challenge, but also an opportunity. An opportunity to be able to set a positive example for others that despite being deaf they can still achieve their dreams and contribute to society in a meaningful manner. And be successful!” she said in a lengthy post.

Balaguer, who previously landed on the top 10 of Miss World 2014, said she was depressed but being deaf should not be an excuse to give up.

“I want to inspire other handicapped people … and always move forward no matter what,” she said.

Balaguer was initially part of the 34 official candidates of the 2015 Binibining Pilipinas, which was announced on January 13.

INQUIRER.net tried to get the side of BPCI to clarify the issue but has not received a response as of posting time. NC